The Arrival of Aeneas at Pallanteum 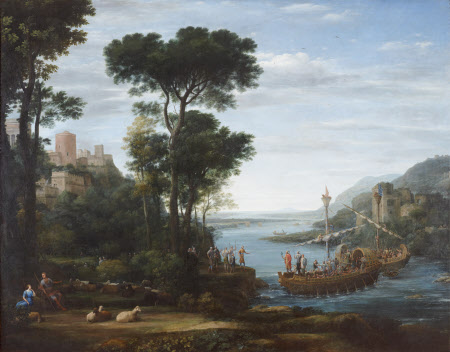 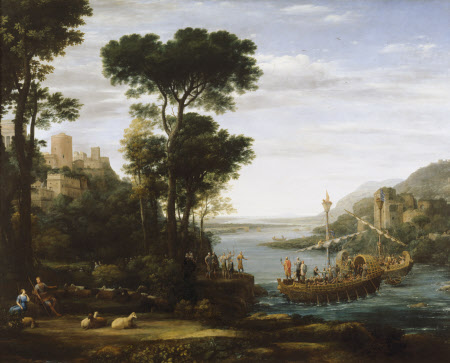 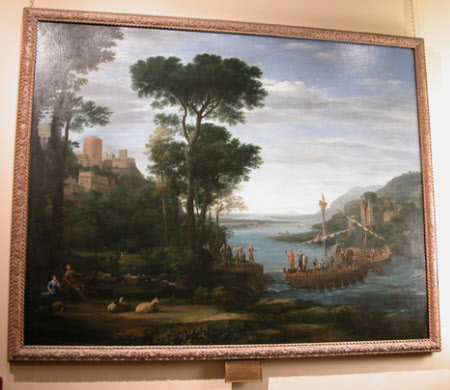 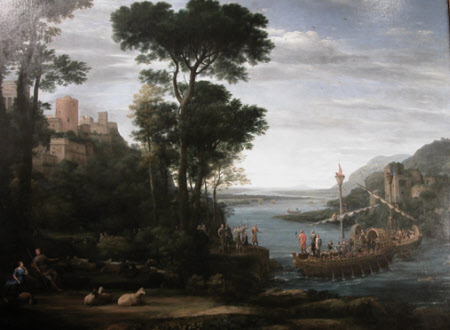 The scene shows the legendary founder of Rome about to disembark upstream on the River Tiber some time after his flight from the fall of Troy. As described in Virgil’s Aeneid, Book VIII, the Trojan Aeneas stands on the prow of his ship, offering an olive branch of peace to Latin King Evander and his son, Pallas. Don Gasparo, who commissioned the painting, was the son of a Roman nobleman, Angelo Albertoni and married into the Altieri family. The flag on the second ship bears the coat of arms of the family after which the picture and its pendant, The Father of Psyche sacrificing at the Temple of Apollo, painted earlier in 1662, are named. The Altieris claimed to be descended from Aeneas. In the last decade of his career Claude depicted scenes from the Aeneid in six paintings. The elongated figures of Aeneas and his companions are characteristic of Claude’s later style. He was, however, less concerned with the subject than with capturing subtle effects of light, in this case in the Campagna landscape around Rome. Claude’s landscapes were much sought after by British collectors. Both pictures arrived in England in 1799 with a special naval escort and were bought by William Beckford, one of the most discerning collectors of the age. Beckford sold the paintings in 1808 for the huge sum of 12,000 guineas – the highest sum ever paid for paintings on canvas at that time.

Oil painting on canvas, The Arrival of Aeneas at Pallanteum by Claude Lorrain (Champagne 1600 – Rome 1682), signed and dated bottom centre and inscribed below Aeneas: Larrivo d'Anea a palant [eo] al monte evantino Claudio. Gille. inv. fecit. ROMAE. 1675. Two oared ships about to land, Aeneas holding olive branch, welcoming group in centre, fortress on hill left, sheep and shepherds left foreground. Aeneas arrives with two galleys at Pallanteum, bearing palm leaf and asking for friendship. Youths of the town assembled in a grove outside and armed are afraid. Prince Pallas, carrying a spear, addresses the newcomers from a cliff. On far side of the river, ruins of ancient towns. The scene is taken from the Roman poet Virgil's Aeneid, Book VIII: 79-123, which describes the journeyings of the Trojan leader, Aeneas. After adventures in the Mediterranean and southern Italy, Aeneas arrived in Latium, at the mouth of the Tiber. Instructed by the river god to seek an ally, he sets sail and soon reached Pallanteum, the site on which he was one day to found Rome. There he met Pallas, son of king Evander, with whom he concluded an armed alliance.