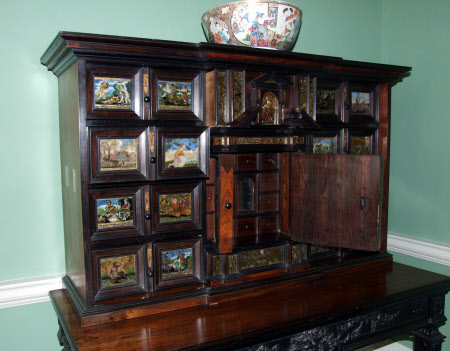 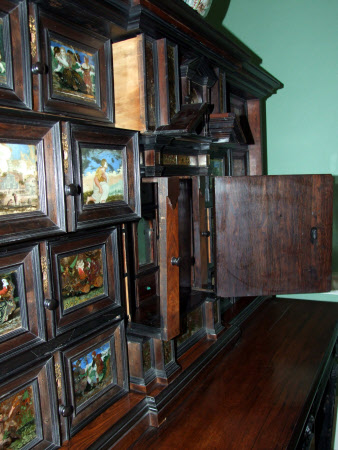 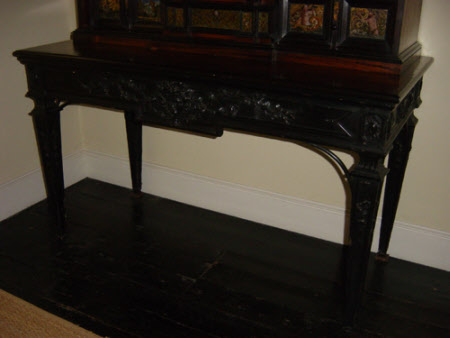 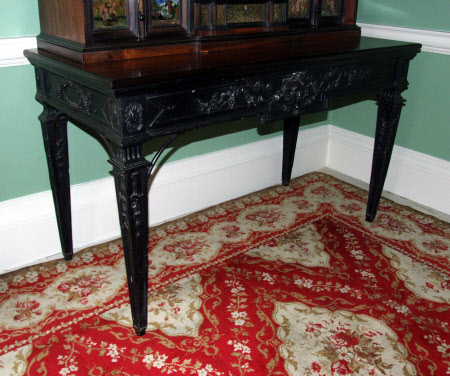 A reverse-painted glass, rosewood and ebony cabinet, Italian, probably Naples, mid-17th century on an ebonized and rosewood side table or stand, Italian, late 18th century. The cabinet of slightly breakfront form, and topped by a moulded cornice, above a central section of a deep drawer painted with a lute player, a slender drawer below. This arrangement above an aedicule opening to reveal seven drawers, one fitted with an arched piece of mirror glass, with two pull-out flanking panels each revealing three slender drawers. This central section between two banks of four short drawers each with applied mouldings with gilt sheet metal mounts spacing a pair of painted panels. The panels throughout depicting gods and goddesses, including Mercury, and Italian scenes, and set behind with paper (some of this is printed material) to give luminosity to the painting. The ends of the cabinet once with a handle, the sites to each end now filled with a pair of engraved ivory plaques depicting scenes from the Bible. The stand with rosewood top with moulded edge, on an ebonized base with a tablet-centred frieze carved with a Bacchic mask and fruit and flowers. The legs tapering and square-section, and with upper waisted frieze carved with flutes, the legs carved with further flowers and foliage and with tapering feet. -- It has been noted that the painted panels to this cabinet may well have been executed by an artist known only by the initials VBL, who worked in Naples in the second quarter of the 17th century. It is unusual for cabinets of this type to be veneered in rosewood and commentators have speculated that the cabinet might have been re-veneered in the 18th (or possibly the 19th) century, when mounted on its accompanying rosewood and ebonized stand [NT 926550.2]. The stand later made - or adapted - to support the early to mid-17th century table cabinet which it now supports. With curving metal braces to the underside. It is possible that the rosewood top is associated with the base.

Date of acquisition not recorded, but part of the Hyde Parker collection and by descent to Sir Richard Hyde Parker, 12th Bt. (b. 1937). Transferred to the National Trust by the Treasury in 1960.