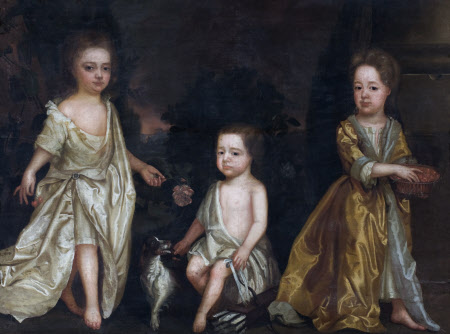 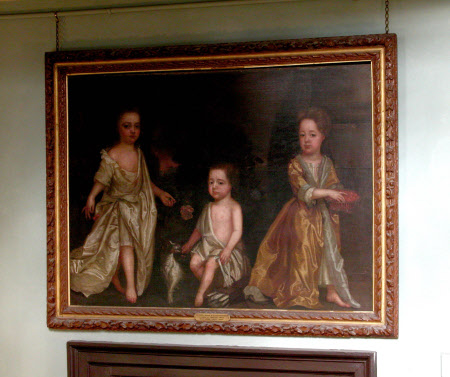 Oil painting on canvas, Possibly Edward Rice (1694 - 1727), Elizabeth Rice, later Mrs Thomas Lloyd and Catherine Rice, later Mrs William Brydges, the three Children of Griffith Rice of Newton and Katherine Hoby of Neath Abbey, English School, circa 1690 - 1700. Previously titled Henry, Griffith and Elizabeth Rice of Walter (1634 - 1675) and first wife Elisabeth d'Eyr. Edward Rice sits, naked with drapery wrapped around him, in the centre, with his sisters standing on either side. The one on the right holds a bowl of cherries and the other, on the left, holds a pink carnation. Edward holds the Spaniel's ear in his proper right hand and a bow in his left, with a quiver of arrows lying at his feet.

According to Gulston, c.1784, in the closet of a Bed Chamber and thereafter by descent; acquired by the National Trust from Richard Charles Uryan Rhys, 9th Baron Dynevor (1935 – 2008), with the aid of the NHMF in 1997