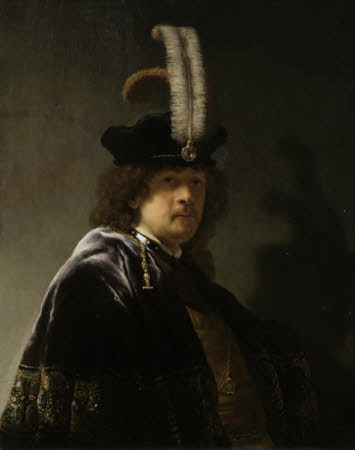 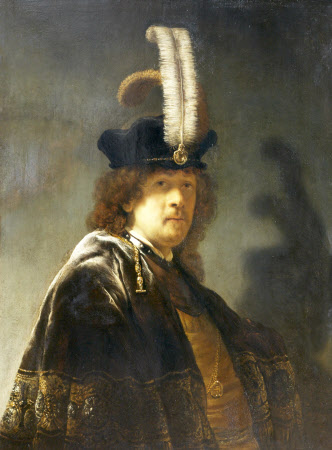 One of the most famous artists of all time, Rembrandt van Rijn (1606–69) repeatedly used his own face to practise and demonstrate his craft. Many of his self-portrait paintings and drawings survive, and this one was painted in 1635, when he had recently moved from Leiden to Amsterdam and begun a successful career. Here we see him dressing up as a wealthy adventurer. He wears a flamboyant plumed hat, a short velvet cloak embroidered with gilt and jewelled adornments, and (bizarrely) a military metal neckband (gorget) from a suit of armour. The lighting is as theatrical as the outfit, and Rembrandt appears to be experimenting with the use of angled light and looming shadows to create a sense of brooding or impending drama. Although the portrait is signed and dated, its attribution was once considered doubtful. However, it has recently been subjected to cleaning and scientific analysis and has been confirmed as a work by the master’s hand.

Oil painting on poplar panel, Self-portrait, wearing a Feathered Bonnet by Rembrandt van Rijn (Leyden 1606 – Amsterdam 1669), signed and dated, at the lower right background: Rembrant / f (followed by three dots in a triangular pattern) 1635. A half-length portrait of the artist with a white and golden feathered bonnet. He is also wearing a sumptuously embroidered velvet cloak, a gorget (metal neckband) and gold chains from which is suspended a medallion, seemingly fashioned from a Spanish doubloon or real. His jewelled beret has elegant golden and white plumes, attached theatrically in the centre with a large gem. He is standing in a starkly-lit studio and his shadow with the feathers is playfully depicted on the wall behind. The portrait was painted in 1635, after the artist had settled in Amsterdam from his native Leiden and had married Saskia van Uylenburgh, cousin of his art-dealer friend.

Rembrandt painted, drew and engraved his own portrait many times, but although we recognise his features in this picture, it is not a straightforward self-portrait. Instead, it is an example of a tronie, a popular form of figurative art in the Netherlands, in which the subject played a character, wore fancy dress, or pulled exaggerated facial expressions. Tronies were intended to show off an artist’s skill in characterisation and illusionism. The portrait was painted in Amsterdam in 1635, at a time of great prosperity for the artist and his is family. His fanciful costume lends the picture a feeling of timelessness, luxury and flamboyance; he wears a velvet cape richly embroidered with gold, an old-fashioned velvet bonnet decorated with two vertical ostrich feathers, a gorget from a suit of armour around the base of his neck and a gold chain across the chest, from which is suspended a coin, probably a Spanish real, salvaged from a shipwreck. Acquired as a genuine Rembrandt by Prince Joseph-Wenzel von Liechtenstein (1696-1772), the picture was considered as such by Rembrandt scholars until 1968 when the art historian Horst Gerson suggested it was possibly by a member of the artist’s studio or by one of his favourite pupils, Govaert Flinck (1615-60). However, the high quality of the picture and the fact that it does not reproduce any other known self-portrait by Rembrandt suggest that it is in fact a prototype. Technical examination at the Hamilton Kerr Institute, Cambridge, in 2013 and 2014, included visual inspection under magnification, infra-red reflectography, x-radiography, raking light photography and pigment and medium analysis. Cleaning and removal of yellowed varnish revealed more of the original colours and painting style. It was found that the signature was contemporary with the creation of the portrait. The infra-red and x-ray images showed how the composition was changed during the execution of the work. The artist altered the position of the left arm, which would not be consistent with it being a copy. The unusually mechanical execution of the feathers on the bonnet suggests that they may have been painted by an assistant. The wood of the panel was identified as being from the poplar/willow family, and the pigments were found to include azurite, smalt and bone black, typical of Rembrandt’s palette. In 2013 the portrait was reattributed to Rembrandt by Ernst van de Wetering. At least three copies are known in Wiesbaden, in the Galleria Nazionale d'Arte Antica (Palazzo Baberini), Rome, and formerly in the Cook collection, Doughty House, Richmond.

Verso: White exhibition label: Kunstmuseum Luzern 1948 Meisterwerke aus den Sammlungen des Fursten von Liechtenstein Katalog Nr. 104 Verso: In black ink: 1635 and more crossed out with blue chalk across Verso: White label, maekedin blue in: 84 corresponds to its inventory number when it was in the Galerie Liechtenstein in Vienna and stamp