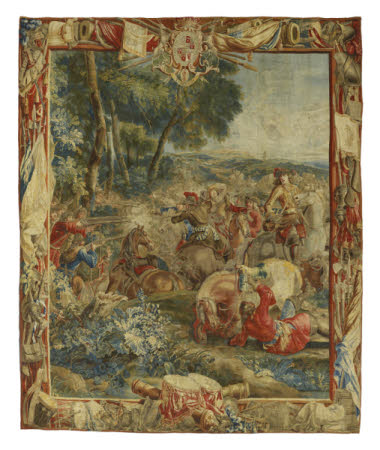 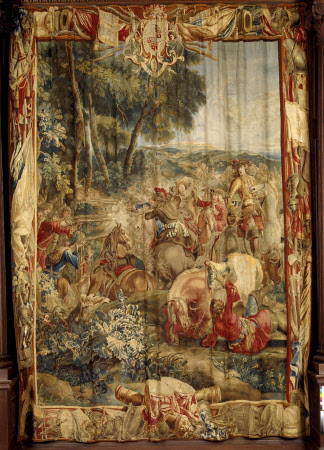 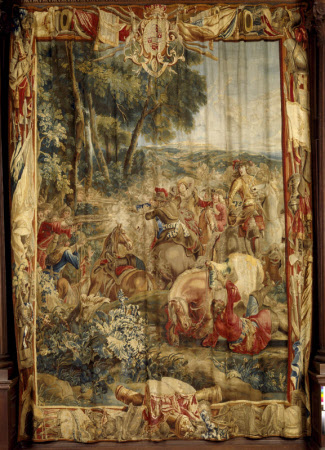 A Brussels tapestry panel called Ambush depicting the Earl of Orkney’s campaign. One of a series of tapestry panels known as “Arts of War” made in the 1690’s. This panel was commissioned by the Duke of Marlborough showing the war of Spanish Succession and were copied for his generals.

Tapestry, wool and silk, 8 warps per cm, Embuscade from a set of three of the Art of War, Brussels, Gaspar van der Borcht or Hieronymous le Clerc after a design by Lambert de Hondt, c. 1705-1715. The tapestry shows the mounted escort of a military convoy being ambushed by soldier hidden in the woods. In the right foreground a horse falls, throwing his rider. Beyond, men on startled horses struggle to fight off their attackers, who fire rifles from among the trees on the left hand side. In the background the end of the convoy making its way over low hills, with a rolling landscape extending into the distance. The tapestry has borders with military trophies and armour on all four sides. In the centre of the lower border there is a pile of drums and cannon which extends into the main field of the design, and the arms of the Duke of Hamilton appear at the top, surrounded by the Order of the Thistle.