The Judgement of Paris 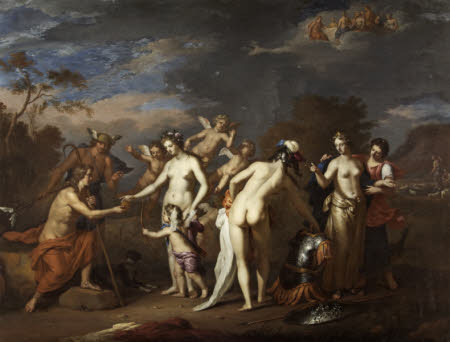 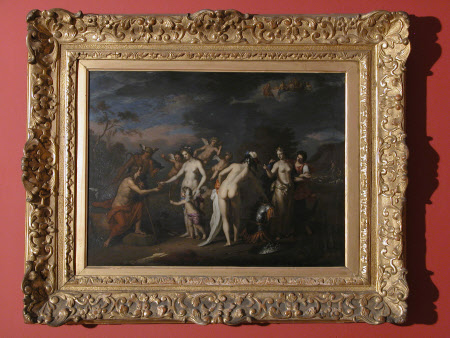 Here Paris, as a shepherd, has been judging a beauty contest between three naked goddesses: Venus, Juno and Minerva. Mercury, in his winged helmet, stands beside him. Paris is handing the apple to the winner, Venus, who is attended by Cupid and putti. Minerva, wearing only her headdress and showing a fine backview, reaches for her armour. Juno, with her attribute, the peacock, is helped into a cloak by her attendant. Deities preside over the scene in the menacing clouds above; a presage to the ensuing event that was the Trojan War. The artist, using a fine technique on a small-scale was influenced by his father and brother who were glass painters. He was a taught by Warnard van Rijsen, a pupil of Cornelis van Poelenburgh, the Italianate landscape painter. He worked in Amsterdam, Paris, Brussels and for wealthy patrons near Utrecht before finally settling in The Hague.

Oil painting on panel, The Judgement of Paris by Gerard Hoet (Zalt Bommel 1648 – The Hague 1738) signed: G. Hoet. Paris, seated at the left with Mercury in his winged helmet standing behind, hands the apple to Venus who is attended by Cupid and putti. Minerva (Athene), in the centre, seen from behind and naked except for her headress, reaches for her armour. On the right, Juno with her peacock, is helped into a cloak by her attendant. Deities can be seen presiding over the scene in the clouds above on the right.

Recto: Signed: Bottom left, G.Hoet Verso: Inscribed: In pencil on back of panel No 2 from the Closet / Bottom Picture on End Wall. Verso: Printed number stuck to back of panel: 99 Verso: On the reverse is an unidentified red wax seal with a 9?) crescent moon above the initials E.L. [or E.I. or E.J.]