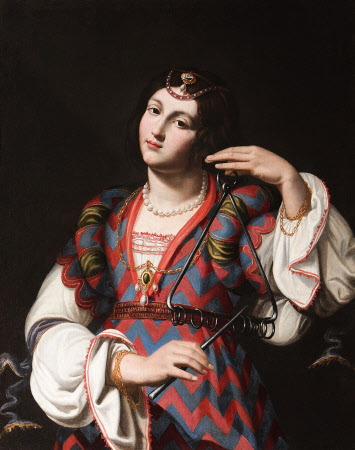 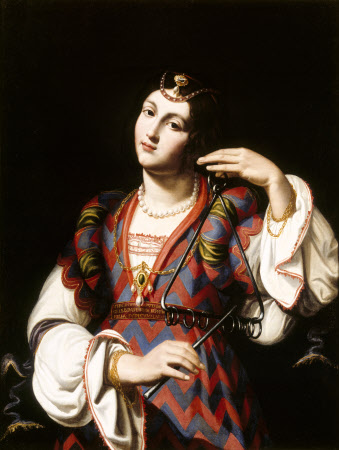 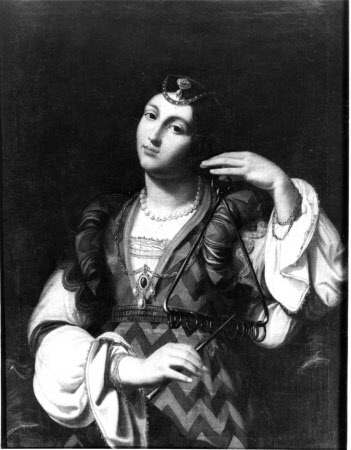 The book of Judges in the Bible relates how Jephthah had vowed to sacrifice to God the first person he saw when he returned from defeating the Ammonites. Tragically, he is greeted by his daughter, who ‘came out to meet him with timbrels and with dances’. She can be identified by an inscription in Latin on her belt. Although she is here shown making music with a percussion instrument, her woeful expression suggests that she is already aware of her fate. That she is so beautiful, renders the sacrifice all the more tragic. The picture must have been painted by a Florentine artist, who was working in the manner of Domenichino.

Oil painting on canvas, Jephthah's Daughter, Italian (Florentine) School, 17th century. Inscribed on her belt: VIRGINUM APUD ISR[AEL] / CELEBRATISIMA JEPTHE / FILIA∙ JUDICUM CAP XIA. A three-quarter-length portrait of young woman, dancing and playing music, as the daughter of Jephthah whom he later sacrifices during the war of the Israelites against the Ammonites (Judges 11: 30-40). She is turned to the left, head facing, with black hair. She is wearing a brightly-coloured red and blue jagged striped dress decorated with jewels and holds a musical triangle in her left hand. The inscription on her belt refers to biblical reference of the daughters of Israel lamenting the death of the daughter of Jephthah the Gileadite who was a virgin.