A River Landscape with Jacob and Laban and his Daughters 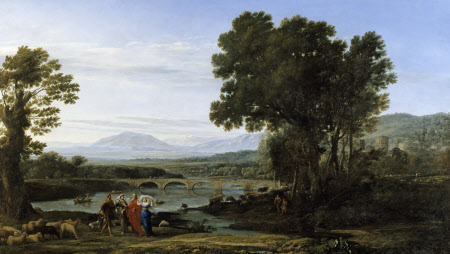 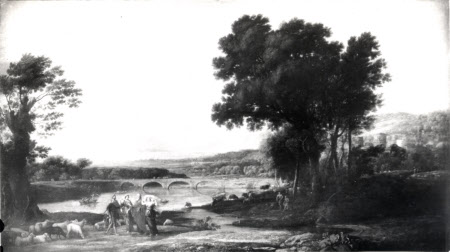 When Jacob went to work for his uncle, Laban, the latter agreed to reward him after seven years with the hand of his youngest daughter, Rachel. When the time came, the elder daughter, Leah, was surreptitiously substituted in the marriage-bed, and Jacob had to serve a further seven years for Rachel too. This biblical episode was not often painted, save by Claude, for whom the choice between the two women seems to have had some particular significance. Painted for Carlo Cardelli in Rome, but auctioned in London in 1686, this was one of the first of the wealth of Claudes to enter British collections.

Oil painting on canvas, A River Landscape with Jacob and Laban and his Daughters by Claude Lorrain (Champagne 1600 – Rome 1682), signed bottom right: CL/AUDIO/ROMA 1654 (?). A landscape depicting a scene from Genesis (xxix, v.16-20). The broad landscape shows a wide valley stretching to mountains in the distance at centre; a town with a castle is in the right mid-distance and trees at right centre background with two herdsmen with cattle beneath them. Across the centre to left, is a bridge of seven arches, spanning a river which flows to the left foreground behind a large oak, before which are sheep with Jacob; Laban and his daughters are nearer the centre.

Acquired, with the Worship of the Golden Calf and a Sunrise [=Embarkation of St. Paul], in 1654 by Carlo Cardelli (1626 - 62); his posthumous inventory 26 Feb. 1663, as one of two Landscapes 12 palmi [long], with "a Moses led home by Rachel and daughters [sic!]; sold by his heirs to Sir Robert Gayer (c.1636 -1702) - ?acting in a syndicate with? - Grinling Gibbons & Parry Walton, by whom advertised for auction at the Banqueting House, Whitehall 11 May 1686; auction turned into 'sale out of hand', when bought by Charles Seymour, 6th Duke of Somerset (1662 -1748) for £200 and sent down to Petworth (see Vertue & Walpole); thence by descent through his daughter's son, Charles Wyndham, 2nd Earl of Egremont (1710 -63); recorded in the posthumous inventory of the chattels of Egremont House, Piccadilly, 5th -10th Dec. 1764, in the Red Damask Drawing Room, as "A Great Landscape by Claude Lorrain"; by the time of the next inventory, that taken by Thomas Phillips, Jr. in 1835, in the Square Dining Room at Petworth (no.321), where it remained until 1990, when removed to the Somerset Room); to John Wyndham, 6th Lord Leconfield & 1st Lord Egremont (1920 -72); by whom handed over, with the major part of the collections at Petworth, in lieu of death duties to HM Treasury in 1956 by whom transmitted to the National Trust Painted in Rome in 1654 for Carlo Cardelli (1626-1662) and bought in London around 1686 for £200 by the 6th Duke of Somerset; thence by descent, until the death in 1952 of the 3rd Lord Leconfield, who had given Petworth to the National Trust in 1947, and whose nephew and heir, John Wyndham, 6th Lord Leconfield and 1st Lord Egremont (1920-72) arranged for the acceptance of the major portion of the collections at Petworth in lieu of death duties (the first ever such arrangement) in 1956 by HMTreasury.