The Presentation of the Virgin 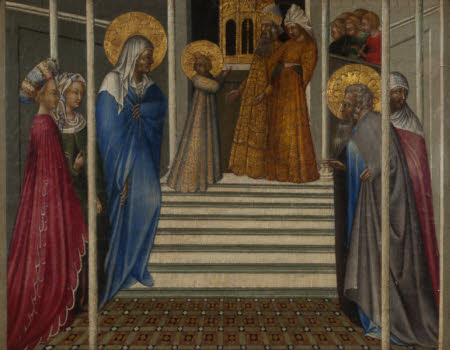 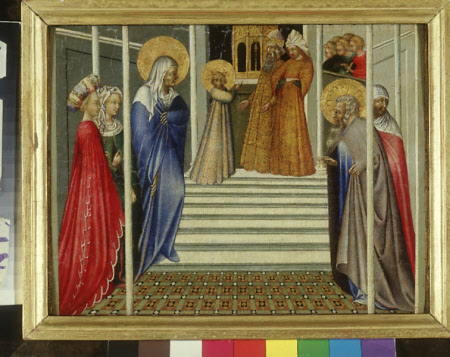 This panel once formed part of a predella, a sequence of panels which formed the base of an altarpiece. The episode probably formed part of a series of pictures recounting the life of the Virgin. Narratives from the Virgin’s childhood were recounted in the Apocrypha and in the thirteenth century text, the Golden Legend. The Virgin can be seen ascending the Temple steps, towards the high priest Zacharias, and an attendant priest. Her mother, Anne, and father, Joachim, both with haloes, await her at the bottom of the steps. The episode illustrates that her parents had carried out the requirements of Jewish law, which stipulated that the firstborn should be presented at the Temple with offerings.

Oil painting on poplar panel, The Presentation of the Virgin by Giovanni di Paolo (Siena c.1399 - Siena 1482), circa 1445-50. The interior of a temple, enclosed on either side by panelled walls, with a paved floor in the foreground and six slender columns; a broad flight of steps in the centre leads to the golden tabernacle, before which stands Zacharias and a second priest, right, and the young Virgin, wearing a pale blue dress flecked with gold, left. The Virgin turns to Saint Anne, who, attended by two fashionably dressed women and wearing a blue robe, stands on the lowest step at the left. Opposite and facing her at the foot of the steps is Joachim; behind him can be seen a male figure and above, on a level with the tabernacle a group of children forming a choir. Panel includes a gold strip of 4mm (1/8in) at each side; top and bottom probably cut.