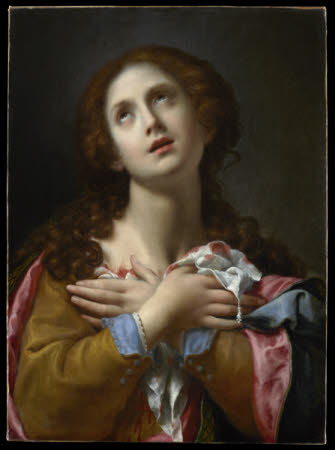 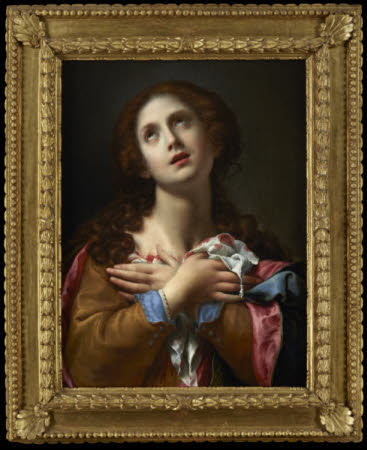 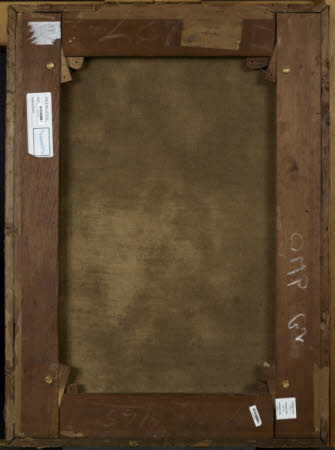 Charged with emotion, this picture depicts the martyrdom of St Agatha, a Christian killed in 3rd-century Sicily. According to medieval legends of her martyrdom, her torture included the removal of her breasts, and here she is shown holding a blood-stained cloth to her chest while looking towards heaven. The painting appears to record a moment of religious ecstasy and love when St Agatha’s wounds were healed as she experienced a vision of St Peter from her cell. It may have been commissioned for display in a private chapel. The Florentine artist Carlo Dolci (1616–87) was known for works that emphasised both the pathos and drama of religious subjects in line with the thinking of the Counter- Reformation movement, which encouraged audiences to connect with the tangible passion and tragedy of biblical narratives. The picture was probably acquired by the banker Sir Robert Child (1674–1721) for his collection of art displayed at Osterley House in the early 18th century, but it was sold in 1934 and repurchased by the National Trust in 2018.

Oil painting on canvas, Saint Agatha, by Carlo Dolci (Florence 1616 – Florence 1687), circa 1665-70. The head and shoulders of a young woman with auburn hair looking upwards, with hands crossed over a blood-smeared white cloth which she presses against her breast, wearing a gown with golden-brown sleeves and blue cuffs, and a blue-grey mantle with pink lining. A label on the back of the painting is inscribed 'Osterley Park / Heir Loom'.

This painting depicts the Christian martyr Saint Agatha of Sicily (c. 231– 251 BC). According to medieval legends of her martyrdom during the persecution of Christians by the Roman Emperor Decius, she was subject to sexual violence and torture, including having her breasts removed. She clutches a white cloth to her chest, covering her wounds; only the smudges of blood on the cloth and her skin hint at the horror of her fate. The painting was probably understood as a depiction of the moment when a vision of Saint Peter appeared to Agatha in the midst of her ordeal and miraculously healed her wounds. Her shining eyes, swollen from tears and turned up to heaven, seem to express suffering, awe and love, all at the same time. The picture is the creation of Carlo Dolci, one of the leading figures of seventeenth-century Florentine art and famous across Europe. As an artist of the Counter Reformation, when the Catholic Church sought to establish empathetic connections between God and the faithful, he used the passionate rhetoric of Baroque painting to inspire veneration of the divine in his viewers. This Saint Agatha, shimmering with drama and beauty, is exemplary of that aim. Saint Agatha is first documented in England in the collection of the banker and connoisseur, Robert Child (1674–1721). He hung it in his house in Lincoln's Inn Fields. By 1782, it is documented in the Yellow Breakfast Room at Osterley Park, which the Child family had acquired through a loan default. By then it was misidentified as an image of Saint Veronica, who wiped Christ's face on the road to Calvary with a cloth, on which was left a miraculous imprint of his face.

Acquired by Sir Robert Child (1674-1721) and recorded in the Dining Room of his house on Portugal Row, Lincoln's Inn Fields; by descent to Robert Child (1739-1792), Osterley Park, recorded in the inventory of 1782, as 'Saint Veronica', among the paintings in the Breakfast Room; by descent to his granddaughter, Lady Sarah Sophia Fane (1785-1867), who married George Child-Villiers, 5th Earl of Jersey (1773-1859), and thence by descent; Hampton & Sons, Middleton Park, 30 May- 5 June 1934, lot 1935, as 'Saint Veronica'; private collection, Luxembourg, as 'Ingres'; anonymous sale; Van Ham Kunstauktionen, Cologne, 20 November 2009, lot 287, as 'Attributed to Jean-Pierre Franque', where acquired by Jean-Luc Baroni; acquired by the National Trust at Christie’s, King Street, London, 5 July 2018, Old Masters Evening Sale, lot 39, with assistance from a fund set up by the late Hon. Simon Sainsbury, a grant from the Art Fund, gifts to Osterley Park and a private donation.