Mercury and the Daughters of Cecrops (Aglauros, Herse and Pandrosus going to the Temple of Minerva) 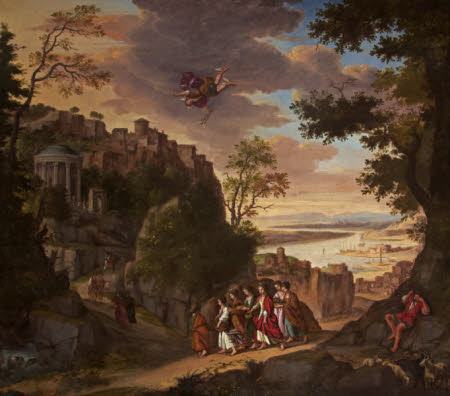 Painting. An oil painting on canvas, Mercury and the Daughters of Cecrops (Aglauros, Herse and Pandrosus going from the Temple of Minerva), follower of Paul Bril (Antwerp 1554 – Rome 1626). A landscape painting, in the foreground, a path winds up from a town by the sea to a temple (similar to the Temple of the Sybil at Tivoli) and other buildings on a hill, on the left. In the centre, the three daughters of Cecrops, the legendary first King of Athens, and other women can be seen, walking on the path. Mercury, identified by his winged sandals and hat and holding his caduceus, or magic wand, is flying above them in the sky. The composition is similar to a small painting on copper in the Devonshire collection at Chatsworth by Paul Brill and the group of female figures is also similar to the group in the painting of the same subject, close to Adam Elsheimer but now attributed to Jacob Pynas of around 1618 now in the Uffizi in Florence. The story depicted is from Ovid's Metamorphoses (II, 708-729). Mercury, who has just punished the shepherd Battus for disloyalty, is flying over the farmlands and woods of Attica when he spots a procession of young girls wending their way to the sanctuary of Minerva. He falls in love with the most beautiful daughter of Cecrops, Herse. He later descends to earth in the hope of encountering her and the story ends with the transformation of the envious Aglauros, Herse's sister, into stone.