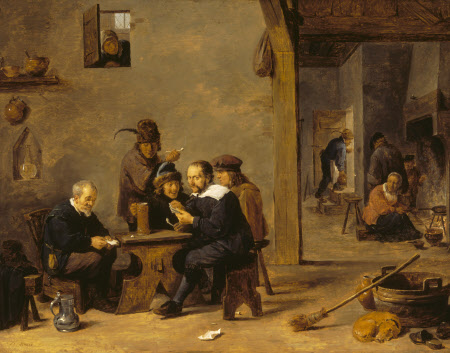 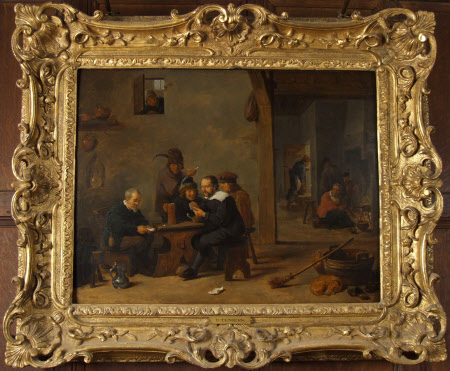 Oil on panel and gilt

The tavern scenes of this Flemish artist frequently centre on figures gambling on games of chance. The overall mood in this example is one of calm – note the sleeping dog – although the pointed look of the figure gazing out at the viewer creates a moment of tension. The broken pipe at his feet alludes to the vanity of his activity while his black suit, wide collar, and refined features mark him out as a cut-above the rest of the party. Perhaps his furtive gaze is that of one who should know better, caught out in the indulgence a low and foolish passion.

Oil painting on panel, The Card Players by David Teniers the younger (Antwerp 1610 - Brussels 1690), c.1645. An interior with two peasants seated at the left, playing cards, and three others, one standing watching; on the right a woman is holding a frying pan over a fire, with two men beside her; in the background a peasant carrying a jug is passing through a doorway and above an old woman looks down from a trap-window; a sleeping dog in the foreground.