Chirk Castle from the South 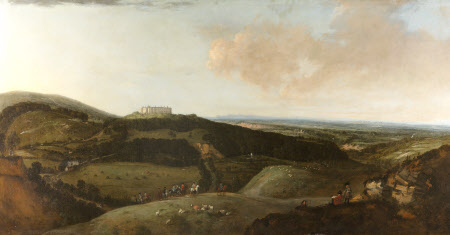 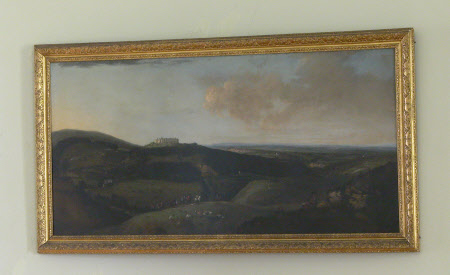 Oil painting on canvas, Chirk Castle from the South by Pieter Tillemans (Antwerp 1684 – Suffolk 1734), signed: Peiter [sic] Tillemans F 1726 [?] This very spectacular view from the south shows the rear of the castle before Pugin redesigned the stables. In the valley on the left is the Castle Mill and on the right the Bath-house of which there is no longer any trace. The scene shows activities on the estate such as charcoal-burning (to the left) and haymaking (in the centre). It was painted for Robert Myddelton (1678-1733), and it does not seem fanciful to see him as the richly-dressed man on a white horse leaving the cavalcade, followed by his brother John Myddelton (1685-1747) in red and their two wives, Anne and Mary, and then by members of his household, two of them in livery. They are riding up the hillside above Bron y Garth to see Tillemans, the artist himself painting the picture on the bottom right.

With some of the contents, in 1978, that were acquired along with Chirk Castle from Lt-Col Ririd Myddelton (1902–1988) by the National Land Fund and handed, on loan for 99 years, to the Secretary of State for Wales (In 1981 Chirk was transferred into the ownership of the National Trust). On loan to the Trust by Guy Myddelton.