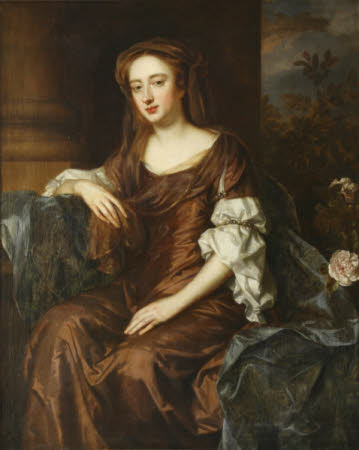 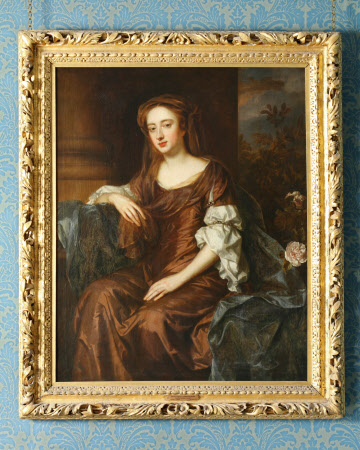 OIl painting on canvas, Winifred Trentham, Lady Strickland (1645 - 1725) by Willem Wissing (Amsterdam 1656 - Burghley House 1687), circa 1680, A three-quarter-length seated portrait, in russet dress and head scarf and blue cloak. Large label on reverse gives details of subject's geneology. A daughter and coheir of Sir Christopher Trentham of Rocester Priory and of Winifred Biddulph of Biddulph, Staffs. Second wife of Sir Thomas Strickland, she was appointed Under-Governess, under the Marchioness of Powis, to James, Prince of Wales, at his birth in 1688. Fleeing with Mary of Modena to France at the end of the year, she became her devoted companion, Governess to the Prince (1694–5), and Bedchamber Woman (1700) and Keeper of the Queen’s Privy Purse (1701). After the Queen’s death she retired to the English Convent of Poor Clares at Rouen, taking with her the royal portraits now at Sizergh. Gilt frame