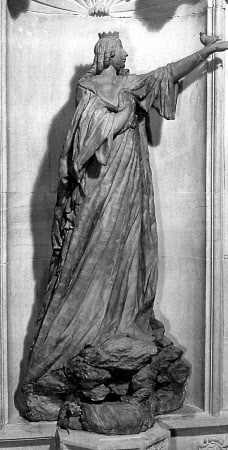 This unusual terracotta sculpture depicts Ela, Countess of Salisbury who founded Lacock Abbey in 1232 and went on to became its first abbess. She is one of 27 figures that were commissioned in 1755 by John Ivory Talbot to decorate the interior of his newly built Gothick Great Hall. The figures were made and fired in the grounds of Lacock by Austrian sculptor Victor Alexander Sederbach.

Statue - One of 27 terracotta sculptures, by Victor Alexander Sederbach, 1755. Ela, Countess of Salisbury, with bird.

Listed in 1827 inventory in the Great Hall, also recorded in Fox Talbot's photographs.