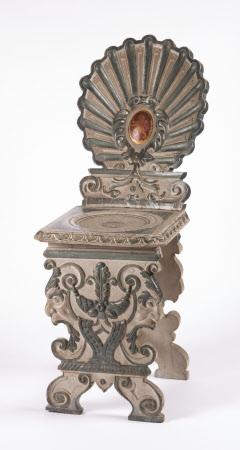 One of a set of six later painted oak 'sgabello' chairs, in the manner of Francis Cleyn (1582-1658) English, circa 1630. Each with a scallop shell carved back centred with a cartouche incorporating the Talbot rampant lion crest. The solid dished seats carved to the edges with a ribbon design and raised on solid front and rear supports, the front carved with scrolls and grotesque masks with feather and scale motifs to the centre, joined by twin upper stretchers and a single shaped lower stretcher, the back attached with an open tenon joint. Each chair later painted white with blue detailing and with porphyry oval ‘hardstones’ within Jacobean strapwork to the back.

The form of these chairs is influenced by the work of Italian craftsmen during the latter years of the 16th century. The form was introduced to England during the first quarter of the 17th century and based on the Italian Sgabello, essentially a trestle stool with a cartouche shaped back. The V&A collection has a comparable armchair (W.9-1953) whose design is attributed to Francis Clein (1582-1648), the German painter and designer, who worked for Christian IV of Denmark, before being employed by Charles I, and probably by William Murray, 1st Earl of Dysart, at Ham (c.1639). Clein was chief designer at the Mortlake Tapestry Works from 1626. The chairs, are thought to have arrived by descent to the Talbots of Lacock from Holland House, Kensington, the seat of Henry Rich, 1st Earl of Holland (c.1590-1649) and have since been repainted, now bearing the painted Talbot arms (a rampant lion), the backs incorporate faux porphyry oval ‘hardstones’ within Jacobean strapwork. The Talbot crest has certainly been present since 1778 as the chairs appear in the house inventory as ‘6 Camp Chairs with Talbot Crest’, which gives some indication of when they were redecorated. They are described more precisely in 1788 as ‘6 Shell Back Chairs’. Given the detachable backs, they seem indeed to be ‘Camp Chairs’, i.e. demountable for use on campaign or on the move or perhaps for ease of storage when not in use. A set of nine hall chairs at Petworth (NT483453) and another set (NT 485391) were first listed in 1680, in the ‘Lobby’ and had been moved to the Marble Hall by 1750, described as ‘eighteen carved and gilt wood [chairs] with halfe moons’. The ‘halfe moons’ refer to the ancient Percy emblem of the crescent moon and are painted onto the backs of the other set. The backs of the comparable set are also carved in the form of shells, with a grotesque head at the base. (James Weedon, September 2019)

Thought to have arrived by descent to the Talbots of Lacock from Holland House, Kensington, the seat of Henry Rich, 1st Earl of Holland (c.1590-1649). Purchased by the National Trust with the family collection of Lacock Abbey contents in situ from Mrs. Petronella Burnett-Brown in December 2009.