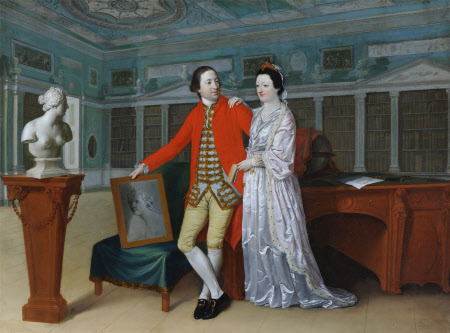 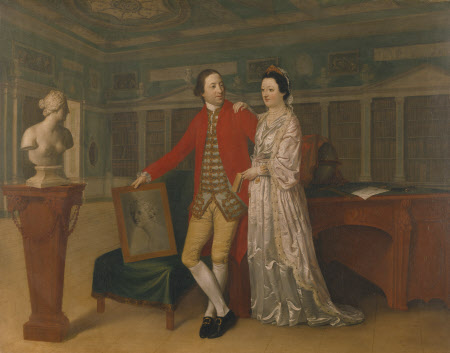 This is a portrait of Sir Rowland Winn and his Swiss wife, Sabine d’Hervart. Having wed in the face of family opposition in 1761, Hugh Douglas Hamilton’s painting records a moment of optimism in their marriage when Sir Rowland had inherited the family’s Yorkshire estate and was hoping to make a name for himself in the world of politics and high society. Here they appear side-by-side enjoying the fruits of their patronage in the newly-completed library at Nostell, their country house near Wakefield. They are surrounded by Robert Adam’s decorative scheme, choice pieces of mahogany furniture by Thomas Chippendale and paintings by Antonio Zucchi. Lady Winn drapes her hand intimately over her husband’s shoulder while he gazes back at her, presumably to make a favourable comparison between her beauty and that of a drawing and bust of Venus, the goddess of love. The painting was originally hung in the Winns’ house in St James Square to show off their taste, education and marital happiness to their London visitors.

Oil painting on canvas, Sir Rowland Winn, 5th Bt (1739 - 1785) and his Wife Sabine Louise d'Hervart (1734 -1798) by Hugh Douglas Hamilton RHA (Dublin 1739/40 – Dublin 1808), c.1767-8. A double 'conversation piece' portrait of Sir Rowland standing in a red coat supporting a drawing of the head of the Venus de' Medici with one hand and looking back at his wife standing beside him in pale Turkish dress, carrying a small book. They are presented full length in the library designed by Robert Adam at Nostell with various pieces of furniture, including the important library table made by Thomas Chippendale.

The library at Nostell had only recently been completed when Sir Rowland Winn and his Swiss wife, Sabine Louise d'Hervart, sat for this portrait by Hugh Douglas Hamilton in c.1767-8. Sir Rowland and Lady Winn, the beautiful daughter and heiress of Baron d'Hervart of Vevey, were married during his Grand Tour back in 1761 in the face of many misgivings from his family about this match to a foreign widow. Having succeeded to the family title and estate in 1765, Sir Rowland had chosen Robert Adam to finish the rebuilding work on the house which his father, the 4th Baronet, had commenced. As the first interior to be finished by Adam for the Winns, the library made an emphatic statement about the pair’s refined taste and patronage at a time when they were attempting to establish themselves in London high society in support of Sir Rowland’s fledgling parliamentary career [Bristol]. Destined for the Winn’s rather less modish townhouse in St James’s Square, Hamilton’s portrait amplified the message that a new couple of fortune and enlightenment had arrived on the scene. Typically for a ‘conversation piece’ portrait, the picture shows its subjects at full length but on a small scale, engaged in a piece of everyday action. Standing side-by-side, arms lovingly entwined and each at ease in their opulent surroundings, the pair present a vision of mid eighteenth-century good breeding and marital success; she momentarily pausing in her reading to gaze at the bust of Venus de’ Medici, while he looks back at her beauty, apparently preferring her flesh-and-blood presence to the cool abstraction of the sculpted goddess of love, or the chalk drawing of the same statue supported in his right hand. Lady Winn appears in pale, fur-trimmed silks in the Turkish fashion; a relatively relaxed form of apparel associated with exotic luxury and private pleasures. The portrait shows off the Winn’s patronage of Adam but also the range of high-quality makers involved in the decoration of their country seat. Hamilton has subtly manipulated the actual appearance of the library to show it off to its best advantage. Notably the two pedimented bookcases [NT 960961], which face each other in real life, are painted side-by-side to give the interior a more expansive look. These fixtures have since been painted to imitate polished wood, but appear in the portrait with their original white, pink and green colour scheme. Hamilton also used a low viewing angle to reveal the matching ceiling decorated to Adam’s design by the plasterer Joseph Rose. Above the bookcase can be seen five of the ten pictures [NT 960060] painted by Antonio Zucchi for the library on the theme of philosophy and the arts. Perched atop the bookcases are eight white classical busts, although there are in fact only six [NT 960128] in these positions at the present day. Prominent in the scene is the large and very fine mahogany library table upon which rests a globe, indicative of the Winns' interest in geography and the wider world, as well as an architectural plan and a pair of compasses, which allude to the couple’s improvements to Nostell. The table itself [NT 959723], decorated with garlands of husks, and lion masks and paws was commissioned from Thomas Chippendale and delivered to the house sometime between January and the end of June 1767. At £72, it was the single most expensive item of furniture commissioned by the Winns. Hamilton records the table’s original matt, red oil-varnished finish, which has since been polished into to a brown, high shine. (Chippendale’s mahogany finish is preserved in the library only on the concealed medal case [NT 959788]). The finish of the pedestal supporting the bust of Venus, with its ram masks and husk garlands, matches the table. However, since this item is no longer at Nostell, it is not clear whether the portrait records a lost piece of Chippendale furniture or was invented by the painter for the composition. The portrait is also, of course, a document of the Winns’ patronage of Hamilton which was multifaceted and highly active at his time. His bill for the portrait, covering the years 1767 to 1769, reveals that the picture, listed as ‘two small whole length Portraits on one Canvass’, cost 32 guineas [Laing]. (By charging in guineas, Hamilton shows that he considered himself a gentleman in contrast to Chippendale, who, as a tradesman, charged in pounds.) To the Winns, he also supplied another portrait, various pictures of everyday life and landscapes, alteration services, and a representation of a marmoset. Of particular relevance to the double portrait is that fact that the bill also charges for four journeys between Nostell and London, helping to explain the accuracy of many of the details of the library’s fittings in the picture. He also charged the Winns for the acquisition and packing of a bust copy of the Venus de’ Medici, which is presumably the statue that appears in the picture. One of the classical busts now on top of the library bookcases is, in fact, a bust copy of this famous statue, and may be the item supplied by Hamilton [960128.5]. Hamilton’s ‘conversation piece’, painted when the Winns’ great effort and expenditure at Nostell were beginning to bear fruit, was evidently held in affectionate regard by the family. Soon after the death of Sir Rowland in 1785, his sister, Charlotte Winn, obtained permission from Sabine to have the picture copied in London prior to its delivery to Nostell where it has remained ever since [West Yorkshire Archive Service, NP/A1/5A/10]. (Entry adapted by John Chu, October 2018)