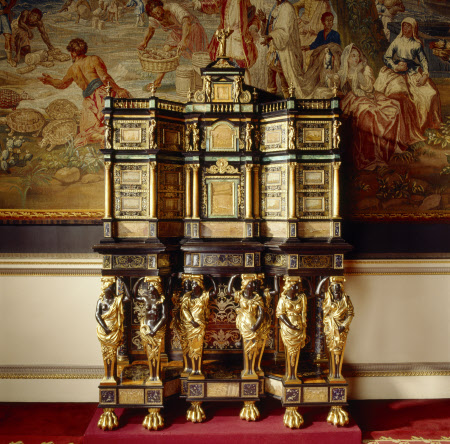 Oak and pine (of fir) veneered with various woods, including ebony and rosewood, panels of pietre paesina (ruin marble) from the Po valley, painted ivory, richly mounted and inlaid with gilt bronze and pewter

The National Trust’s collections contain some of the most remarkable decorative cabinets in the UK. They were designed as showy, high- status pieces of furniture to grace a room where an elite family’s most important guests might be entertained. They also had a practical function, often holding treasured personal items and letters, sometimes in secret drawers. This cabinet is one of the most impressive and startling. It was made in France in the 1670s by a talented craftsperson, possibly Pierre Gole (c.1620–84), who was associated with the royal factory at Gobelins in Paris. It is designed in the form of an architectural model akin to the façade of a Parisian Jesuit church or its high altar. It probably belonged to Bartholomäus Herwarth or Herwart (1607–76), a German banker living in Paris, who had links to the royal court, and then descended by marriage to the Winn family, who lived at Nostell, Yorkshire.

An ebony, hard-stone and metal-mounted cabinet-on-stand, possibly by Pierre Gole (c.1620-1684) of the royal manufactory at the Gobelins, Paris, circa 1675 with later alterations. The cabinet modelled as a 'church' facade and breakfront, with a recessed central section. Topped by a pediment flanked by scrolled trusses and mounted with a (later) carved and gilded wooden model of Fame. The cabinet proper topped by a collonade above an arrangement of twenty-four drawers (their linings replaced) around a central cupboard door enclosing a mirror-lined and stepped interior. The drawers and door all faced with panels of pietra paesina, the contours of the stone imitating buildings in landscapes. The central recessed section with panels framed by stained green ivory borders simulating Verde d’Orreza or Verde di Corsica marble and with gilded framing mouldings and mounts. The outer drawers framed by foliate marquetry of pewter and brass. The upper register of drawers spaced by gilt bronze trumpeting angels; the lower register by stained ivory columns with gilt bronze capitals and plinths. The blue-stained ivory plaques to the columns' pedestals with later decoration. The ends of the cabinets with similar very large panels of marble framed with later marquetry borders of ebony and ivory. The stand altered with floral marquetry panels relocated from their original sites, and topped by a run of metal marquetry-fronted drawers raised on eight carved caryatids, modelled as figures swathed in fabric and on tapering pedestals. Now gilded and black-painted, these were originally silvered and gilded. All raised on lion's paw gilded feet.

This cabinet-on-stand was brought to Nostell in 1781 for Sabine d'Hervart (1734-98), wife of Sir Roland Winn, 5th Baronet (1739-85). It was shipped from her family house in Vevey, Switzerland on the death of her mother, Baroness d'Hervart, and as such is believed to have been made for, or acquired by, their ancestor, Barthélemy Hervart (1607-76), a courtier of Louis XIV, or another member of this powerful banking family which originated in Augsburg. Cabinets like this were used both to store curiosities and treasures and, made from opulent and rare materials, signalled their owner’s wealth and sophistication. In the 17th century, the cabinet's colours would have been vibrant and the caryatids which constitute the stand’s front supports were not only gilded but silvered; they appear black now because the silver tarnished over time and a later generation, believing them to have been black originally, painted them over in black. In inventories taken at Nostell Priory in 1806 and 1818 the cabinet and its stand were listed in the 'Entrance Hall' (the Top Hall) which was being used as a storeroom at the time. It was first listed in the Tapestry Room, where it still stands, in 1885, but it may well have been there since the 1820s when the room was re-furnished, and its present scheme introduced. Since being in the Trust’s care, it has been catalogued both as 'by Pierre Gole' (c.1620-84) - Louis XIV’s Dutch ébéniste (cabinet-maker) du roi - and then, more recently, as 'previously catalogued as by Pierre Gole' when it was felt that such a definitive attribution was not technically consistent with the cabinet on stand's construction or quality. It was not illustrated or discussed in 'Pierre Gole, Ebéniste de Louis XIV' by Theodoor Herman Lunsigh Sheurleer (2005) and is relatively little-known outside of England. In 2019, however, it was used by Parisian auctioneers Pescheteau Badin (27th March 2019) to help attribute a cabinet to Gole, thus reviving interest in the Nostell cabinet’s origins and prompting a new investigation into its age and condition. There has never been any doubt that Nostell’s cabinet on stand was made by a leading later 17th-century craftsman working in France - Alexandre-Jean Oppenordt (Dutch, circa 1639-1715), Jean Harmant (fl. c. 1660), Renaud Gaudron (d. 1727) and Domenico Cucci (1635-1704) have all been put forward as its possible maker – but identifying a maker for any piece of 17th-century furniture is fraught with difficulty. Gole is widely known because he is relatively well-documented, whereas hundreds of other cabinet-makers are unknown, partly because it was not common practice for cabinet-makers to sign their work, and partly because no documentation attesting to their businesses survive. In addition, late 17th-century craftsmen were highly migratory, and so too their styles and techniques. As far as the Nostell cabinet on stand is concerned, later restorations and replacements (the back of the cabinet is now of 20th-century plywood, all bar four of the piece’s drawers have been re-lined, and the marquetry panels in the stand have been reconfigured) complicate the picture still further. While a recent study has found that some elements of the cabinet’s construction, and the materials used to make it, conform to those found on pieces of furniture which have been firmly attributed to Gole, it has also found other elements that do not. The latter, arguing against an attribution to Gole, include dendrochronology of some of the oak elements to the pediment and the four original 17th-century drawers. The timbers were felled in the 17th century, which fits with the assumed date of the cabinet, but probably grew in northern or north-eastern France, which was not typical for Parisian cabinet-makers in the 17th century, who were far more likely to use the more easily accessible oak felled in Burgundy. In addition, the Nostell Priory cabinet’s marquetry, with a background of ebony, is not typical of Gole’s work either, since he tended to use tortoiseshell as the ground for his decorative designs. Neither, metallurgical analysis has shown, is the metal used in the marquetry consistent with Gole’s output: the pewter has a much higher lead content, and the brass a much higher copper (and lower zinc) content than the brass found on his other pieces of furniture. By contrast, the use of burr elm – probably for its decorative effect - to line the four remaining 17th-century drawers, is amongst the most persuasive elements supporting attribution of the Nostell cabinet to Gole. Burr (or other expensive) timbers were used in the same way by leading ébénistes of the late 17th century like André-Charles Boulle (1642-1732) and line the drawers of a small desk at Boughton House made by Gole. In addition, the design of the gilt bronze mounts is identical to those which decorate the Duchess de Fontages cabinet in Le Musée Jacquemart-André, Paris, another piece of furniture which is accepted as having been made by Gole, although it should be noted that cabinet-makers sometimes shared mount patterns. This cabinet also shares the Nostell cabinet’s unusually recessed central section. Lastly, the pediment of the Nostell cabinet, with its raised central ‘tabernacle’, is more in the cabinet-making tradition of the Low Countries or Italy rather than France, where cabinets were usually flat-topped. Counterintuitively this may strengthen the attribution of the Nostell cabinet to Gole, since he was born in Bergen, Holland before beginning work in Paris around 1650. The full list of materials used in the cabinet's construction is as follows: Carcase of oak and softwood (pine or fir); later plywood to rear of cabinet; drawers made of elm with later mahogany and chestnut restorations; exterior veneered in pewter, brass, copper, burr wood (probably stained ash), ebony, stained ivory, stained black wood (probably pearwood); interior marquetry of ebony, olivewood, purpleheart, stained holly, stained sycamore; git bronze; pietra paesina; gilded and painted wooden figures (originally silvered); painted plaster panels (probably replacing ivory panels). Adapted from a report by Yannick Chastang, conservator, 2019