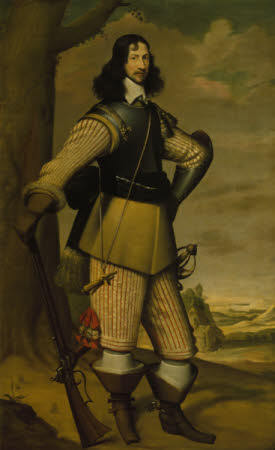 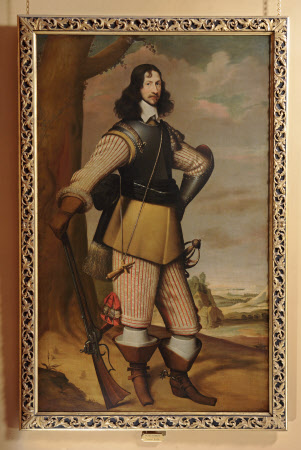 The sitter was the fifth son of Sir George Booth (1566-1652) and Catherine Anderson, the daughter of Sir Edmund Anderson, Chief Justice of the Court of Common Pleas. He married twice: firstly to Dorothy St John, daughter of Sir Anthony St John, the younger son of Oliver, Earl of Bolingbroke; and secondly, in 1659, to Anne, widow of Thomas Legh of Adlington. In 1651 he was accused of conspiring with the Scots to restore Charles II and imprisoned in the Tower of London. He is buried in Chester Cathedral.

Oil painting on canvas, Colonel Sir John Booth (1610-1688), style of Edward Bower (fl. London 1629 – d.London 1667), circa 1640. Full-length portrait of a man, standing, turned to the right, gazing at the spectator, by a tree in a rocky landscape, gun resting on the ground, supported by his right hand, his left on his hip. The Master of the Armouries, writes: ‘It depicts an officer of a unit of light cavalry armed with a light gun called a harquebus. You could call him “An Officer of Harquebusiers”. He is wearing a cuirass over a sleeveless buff-coat, or at least it has not got sleeves of buff-leather. The cloth sleeves may have been permanently attached to the coat or to a separate waist-coat. He is also wearing a long-gauntlet on his left hand, to defend his bridle-arm. He is armed with a basket-hilted sword of a very unusual type, and a harquebus with a miquelet lock, and therefore presumably made in Spain. The object hanging on his right hip is a charging spanner, that is a combination of a powder flask containing the finer powder used for priming a gun, and the spanner used for spanning (winding up the mechanism) of a wheel-lock. Presumably his pistols which would have been in the holsters of his saddle, had wheel-locks. I presume he dates from about 1640-1645.’ Sir John Booth was the fifth son of Sir George Booth and he married Dorothy, daughter of Sir Anthony St. John. He was knighted by Charles II in 1660.