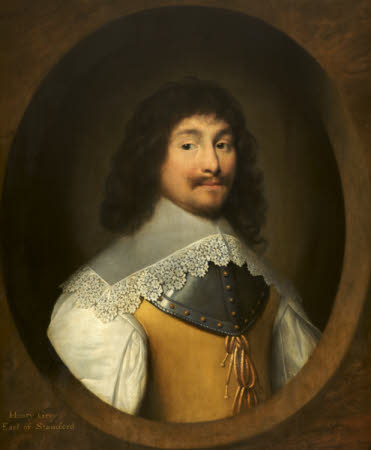 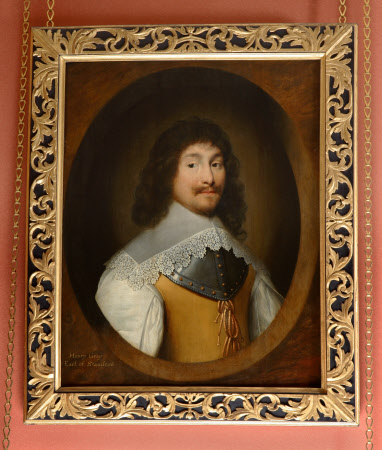 Henry Grey, 2nd Lord Grey of Groby, son of Sir John Grey(d.1611) was created Earl of Stamford in 1628, having inherited estates in Stamford through his wife Lady Anne Cecil, the youngest daughter of the 2nd Earl of Exeter. She bore him five children. Their daughter, Lady Elizabeth, married Sir George Booth, 1st Baron Delamer (1622-1684), who owned Dunham Massey. Their son, John, of Enville Hall, Staffordshire, ensured the continuation of the Stamford line through his son, Harry, who became the 3rd Earl. In the Civil War Henry Grey sided and fought with the Parliamentarians.

Oil painting on canvas, Henry Grey, 1st Earl of Stamford (1599-1673) by Cornelius Johnson (London 1593 - Utrecht 1661), signed with initials and dated 1638; with later inscription. A painted oval head-and-shoulders portrait of a man turned slightly to the right, gazing at the spectator, wearing a shoulder, linen collar edged with lace over a gorget under which he wears a buff coloured jerkin tied with gold laces and with white sleeves. Shoulder-length natural brown curly hair.