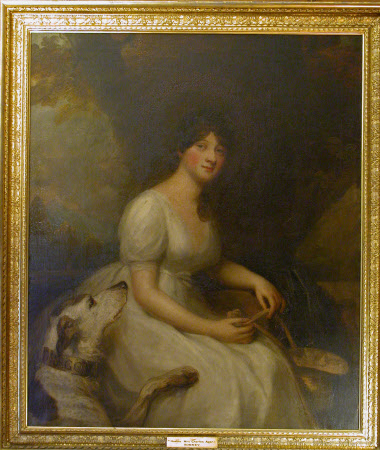 This portrait of Anna Maria Hunt was painted by George Romney in his London studio over seven sittings in 1791. However her trusty hound 'Dragon' was added at a later date as was a new hair style.

Oil painting on canvas, Anna Maria Hunt, the Hon. Mrs Charles Bagenal-Agar (1771-1861) by George Romney (Dalton-in-Furness 1734 – Kendal 1802), 1792-93. A three-quarter-length portrait of the granddaughter of Mary Vere Robartes who inheriterd the estate of Lanhydrock in 1798 which was painted at her coming of age. She is seated facing to the right in a landscape, her left arm resting on a stone ledge holding the ribbons of her bonnet, a dog with a collar inscribed Dragon clambers on the left.

George Hunt (?1720-1798), London, Hampton & Lanhydrock; his niece, the sitter; thence by direct descent through the Barons Robartes and Viscounts Clifden (not, however, recorded at Lanhydrock in the year of the fire, 1881); given by the Hon. Gerald Agar-Robartes, 7th Viscount Clifden (1883-1966), with the transfer of the house to the National Trust in 1953