The Farnese Hercules (Grisaille Paintings of Classical Statuary: a set of eight reproductions of celebrated antiques with the addition of niches, pedestals, classical masonry, trees, etc.) 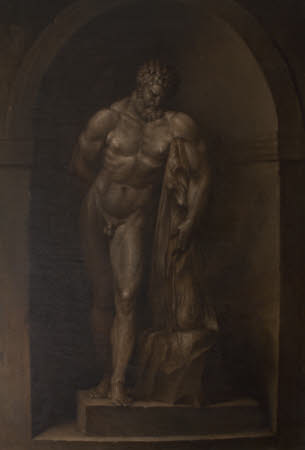 The Farnese Hercules was rediscovered at the Baths of Caracella in Rome in 1546, was owned by Cardinal Alessandro Farnese and had its own room in his palace in Rome. This is one of a set of eight paintings of celebrated classical antique marble statues from ancient Greek statuary, painted in grisaille (grey-green monochrome colour) by Louis-Gabriel Blanchet in 1765 with the addition of niches, pedestals and trees. The set was probably commissioned as souvenirs, by John Parker, MP (1734/5 – 1788) during his Grand Tour of Italy, with his first wife, in 1764, and may have occupied a garden building at Saltram.