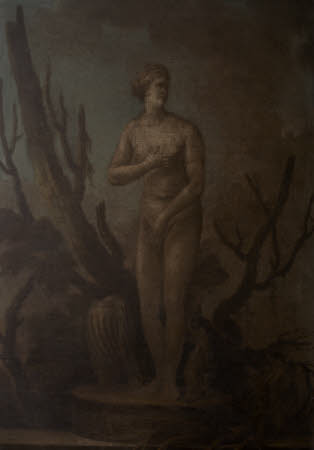 It is not sure precisely when the Venus de’Medici was rediscovered but evidence for copies suggests it was known at least by 1559 and it was in the Villa Medici in Rome by 1638. It roused a great deal of admiration but was sent to Florence by Pope Innocent XI in 1677 and is now in the Uffizi, considered to be a more suitable place for viewing her. This is one of a set of eight paintings of celebrated classical antique marble statues from ancient Greek statuary, painted in grisaille (grey-green monochrome colour) by Louis-Gabriel Blanchet in 1765 with the addition of niches, pedestals and trees. The set was probably commissioned as souvenirs, by John Parker, MP (1734/5 – 1788) during his Grand Tour of Italy, with his first wife, in 1764, and may have occupied a garden building at Saltram.

History not known, but from their date probably commissioned by John Parker, later Lord Boringdon, on his Grand Tour; then, from the absence of any reference to them in catalogues or inventories and their plain white frames, probably set into the walls of some garden building;given to the National Trust as part of the endowment by Montagu Brownlow Parker, 5th Earl of Morley (1878-1962)