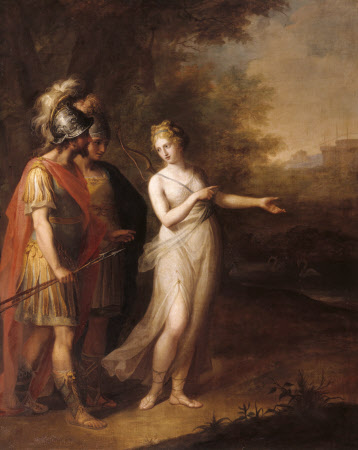 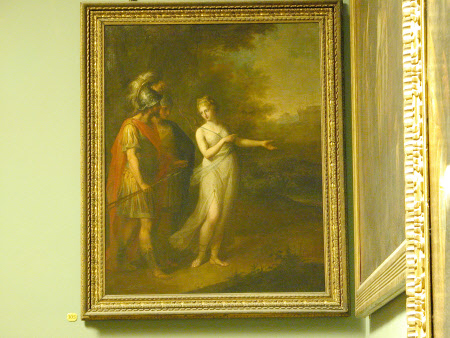 Aeneas’s mother, the goddess Venus, disguised as a huntress, with a bow and quiver on her back, has appeared to direct Aeneas and his faithful companion, Achates to the city of Carthage and Queen Dido. The two Trojan warriors have survived a storm, after the Sack of Troy and have arrived on the coast of Africa. The scene is from an episode in the first book of Virgil’s epic poem the Aeneid. This painting was exhibited at the Royal Society of Arts in 1768 and at the first Royal Academy exhibition in 1769 by a co-founder of the Royal Academy and friend of Sir Joshua Reynolds. Angelica may have got her inspiration for the subject matter from her artist friend, Nathaniel Dance-Holland, whom she had met in Rome and who painted a related subsequent episode in the story of The Meeting of Dido and Aeneas and Achates now in Tate Britain.

Oil painting on canvas, Venus directing Aeneas and Achates to Carthage by Angelica Kauffman RA (Chur 1741 – Rome 1807) A scene from Virgil's Aeneid 1: 350-371, when Aeneas and his faithful companion, Achates, have arrived on the coast, near Carthage after a storm and Venus, his mother, disguised as a huntress, directs them towards the city and Queen Dido. Venus stands in the centre of a landscape, a bow on her back, with the two Trojan warriors at the left.