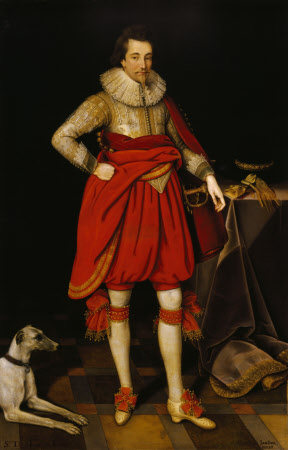 Oil painting on canvas, Sir Thomas Parker of Ratton (b.1594/5 - 1663) by Marcus Gheeraerts the Younger (Bruges 1561 – London 1635), circa 1620. A full-length portrait, almost facing to right, his right hand on his hip, his left on his sword. He wears white brocade doublet, red pantaloons, red garters and rosettes, and red rosettes on his shoes. A table right and a dog left. (The gloves on the table appear to be superimposed on an earlier painting of red gloves.)