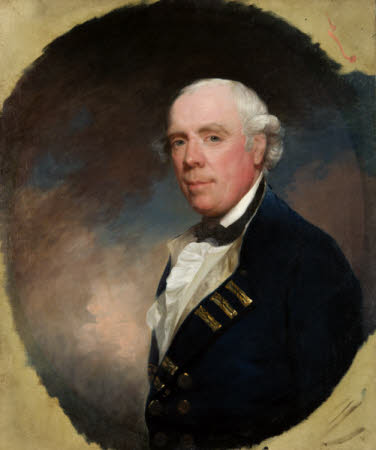 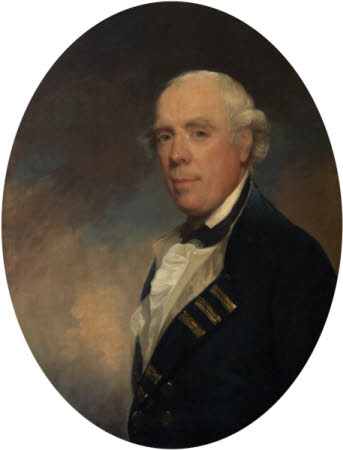 Oil painting on canvas, The Hon. Samuel Barrington (1729-1800) by Gilbert Stuart (North Kingstown, Rhode Island 1755 - Boston 1828) inscribed bottom right: Stuart, pinxit / 1786. A half-length portrait of the 5th son of the 1st Viscount Barrington looking to the left, head facing with grey eyes and powdered hair, in naval uniform, of a blue coat with metal buttons, and white neckcloth. Sky background. Admiral Barrington was the fourth son of John Shute Barrington, 1st Viscount Barrington (1678–1734) and Anne Daines. He entered the Navy at an early age in 1741, became a lieutenant in 1745. Saw service throughout the Seven Years War. Served under Hawke in Basque Roads expedition, 1757; under Rodney at destruction of shipping at Havre-de-Grâce, 1759; with Hon. J. Byron at Louisbourg, 1760, and with Keppel at Belle Isle, 1761. Served as flag-captain under the Duke of Cumberland, 1768; attached to Channel Fleet 1771–4. In 1778 he was C-in-C West Indies and subsequently 2nd in command to Howe at Gibraltar. He had a reputation in the service for kind-heartedness and humanity. He was made an admiral in 1787. He died at Bath unmarried.