The Saltram Bureau by the 'Maître du Bureau de l’Électeur’

Master of the Prince Elector's Desk 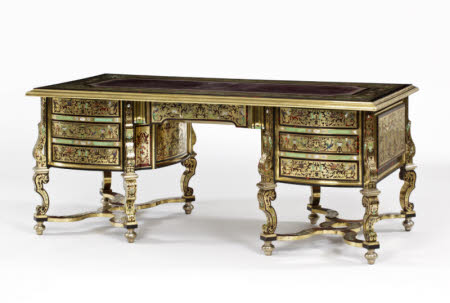 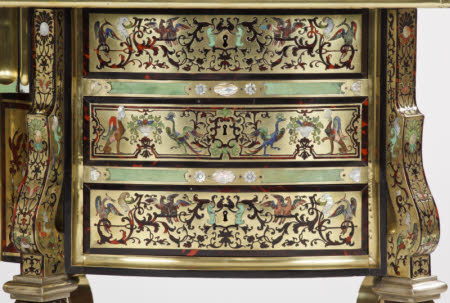 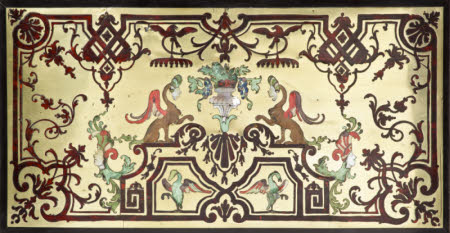 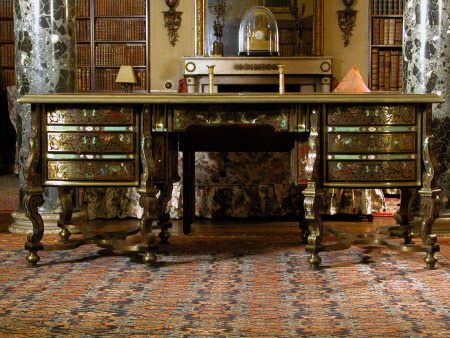 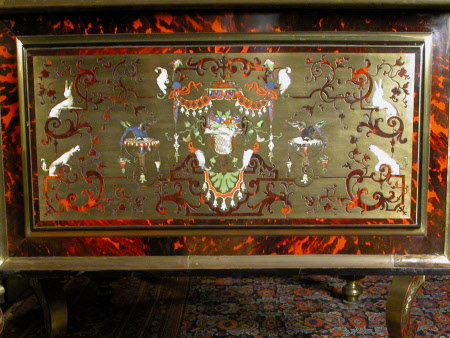 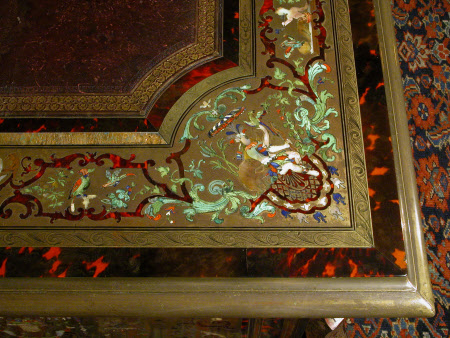 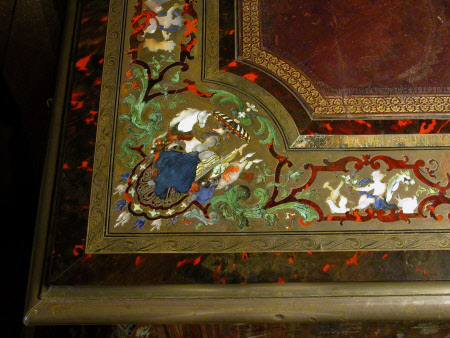 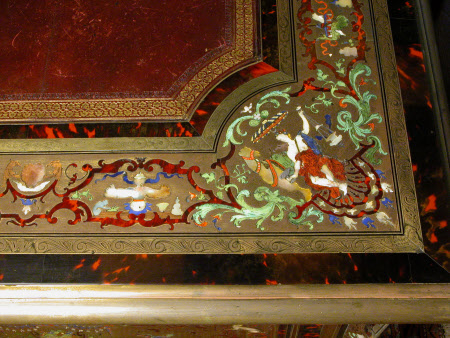 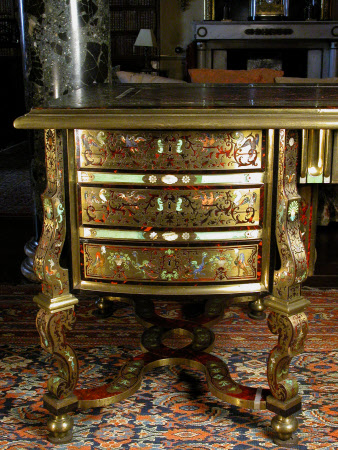 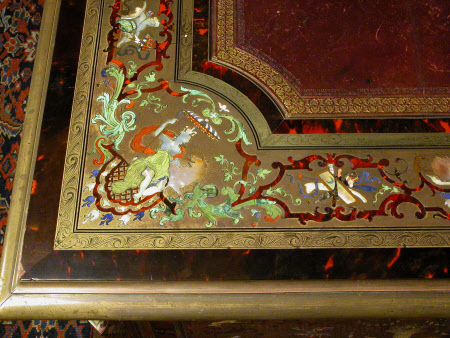 A desk or bureau, Paris, circa 1692 - circa 1710, by the ‘Maître du Bureau de l’Électeur’ (the Master of the Prince Elector’s Desk). Polychrome contre-partie Boulle marquetery in bass, tin, copper, coloured paper-backed horn, mother of pearl, tortoiseshell and ebony on a carcass largely of pine, with pine and walnut. Of two banks of three drawers flanking a central frieze drawer above a kneehole. The flanking drawers each raised on four scrolling legs joined by shaped flat stretchers, on turned feet.

This impressive French bureau is part of a small group of extremely rare polychrome marquetry desks, of which similar examples are kept at the J. Paul Getty Museum, Los Angeles, which was made for Elector Max II Emanuel of Bavaria (after 1692-c.1710; inv. no. 87.DA.77) and the Victoria & Albert Museum, London, which belonged to captain Charles Spencer Ricketts (c.1692-1710; inv. no. 372-1901). While the bureau has for many years been attributed to André Charles Boulle (1642-1732), it is now associated with the ‘Maître du Bureau de l’Électeur’ (the Master of the Prince Elector’s Desk, i.e. the maker of the desk at the Getty). On a carcass of primarily pine with some walnut, this desk is veneered with polychrome contre-partie ‘Boulle’ marquetry in brass, tin, copper, coloured paper-backed horn, mother-of-pearl, turtle shell and ebony. Each pedestal contains 3 drawers and is mounted on 4 legs united by carved stretchers that are connected by the top, underneath of which runs one long drawer. The panels feature arabesques and chinoiseries decorations loosely in the style of Jean Berain, although no motif derives directly from his designs and prints. The Saltram desk was made in Paris sometime between 1692 and 1710 and has been examined in great detail by Christopher Rowell in ‘Furniture History’ in 2011. He established that the bureau must have been restored in the 1880s, which obliterated much of the engraving of the top. A 1926 photograph in ‘Country Life’ shows the bureau in the Saloon at Saltram and thus ‘providing a terminus ante quem for the loss or removal of the four pendant aprons below the four sets of three flanking drawer-fronts.’ (Rowell 2011, p. 22) The desk's exact provenance remains subject to debate. It was described in a letter, franked 9 October 1811, from the Rev. Thomas Talbot (brother-in-law of John Parker, 2nd Lord Boringdon and 1st Earl of Morley (1772-1840)) to his wife in Norwich: …the Music Room, which corresponds exactly to the Velvet Room on the other side, has some good Pictures, some fine China etc, & in this room and in the library are two buhl [sic] tables… one of them belonged to Sarah Duchess of Marlborough & is the most splendid piece of furniture I ever saw in any house. In his unpublished ‘History of the Parker Family’, Albert Parker, 3rd Earl of Morley (1843-1905) amplified the provenance of the bureau: The large Buhl [sic] table in the Saloon belonged to Louis XIV. He sent it to Sarah Duchess of Marlborough whose daughter [the Duchess of Montagu] gave it to Lady Catherine Parker. It is rather unlikely that the Duchess of Marlborough, whose husband, the 1st Duke, was one of Louis XIV fiercest military enemies, would have been presented with such a lavish gift by the King of France. However, a tenuous link between the Duchess and the Parker family of Saltram might exist. Sarah, Duchess of Marlborough’s fourth and youngest daughter, Mary, Duchess of Montagu, was said to very fond of Lady Catherine, married to John Parker of Boringdon in 1725. Quite apart from its lavish marquetry, the Saltram bureau was cutting edge in terms of its design. Rowell writes: ‘Despite being of the type called traditionally a bureau Mazarin, the [desk] looks forward to the early-eighteenth-century development of the bureau plat or writing table, which was intended more for the library or study than the bedroom or dressing room. Some so-called bureaux Mazarin were intended more for show than for practicality, such as the Getty bureau of Max II Emanuel, which is lower and smaller’ (Rowell 2011, p. 25). Indeed, as opposed to other desks in the ‘Bureau de l’Électeur’ group, which were intended to be placed against a wall, the Saltram bureau is decoated on all four sides.

By Parker family tradition originally in the collection of Sarah, Duchess of Marlborough (although neither recorded in the 1719 or 1740 inventories of Blenheim Palace, nor in the 1740 inventory of Marlborough House, St James's) and by descent to her daughter Mary, Duchess of Montagu (not documented), who is said to have presented it to Lady Catherine Parker, wife of John Parker (1703-1768). Accepted in part payment of death duties by HM Treasury from the executors of Edmund Robert Parker, 4th Earl of Morley (1877 - 1951) and on loan to the National Trust from 1957 until gifted outright in 1984.

END_OF_DOCUMENT_TOKEN_TO_BE_REPLACED

Master of the Prince Elector's Desk (1)