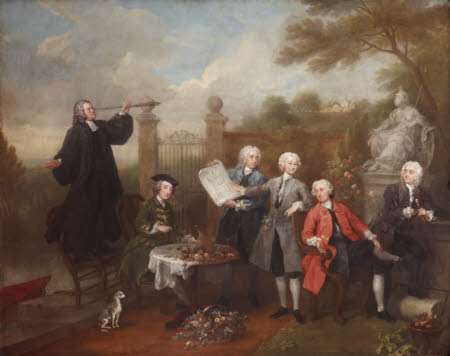 Oil painting on canvas, The Hervey Conversation Piece by William Hogarth (London 1697 - London 1764), signed, on flower pot, right foreground: W. Hogarth pinx, 1738-40. A conversation piece painted for John Hervey, 2nd Baron Hervey of Ickworth (1696-1743), who stands at centre, wearing the gold key, the badge of his office as Vice-Chamberlain to the Royal Household. Hervey gestures at an architectural plan (probably from Isaac Ware's Palladio) being held up by Henry Fox, later 1st Baron Holland (1705-74), and Surveyor-General of the King's Works. Fox's elder brother, Stephen (1704-76), later Joint Secretary to the Treasury and 1st Earl of Ilchester, is seated at a table, laden with fruit and wine, a small dog at his feet. Stephen Fox's walking stick upsets the chair on which a clergyman, peering through a telescope, teeters, precariously close to the river behind him. Wearing red, seated to Hervey's left and leaning towards him, gesturing, is Charles Spencer, 3rd Duke of Marlborough (1706-58), a colleague of Hervey's in the Royal Household, having been made a Gentleman of the King's Bedchamber in 1738. Beside Spencer, with his foot resting on a garden roller, is the Whig politician Thomas Winnington (1696-1746). The men are assembled inside a walled garden or park, beside a river, and before a wrought-iron gate from which a path winds up a hill to a village and church. A statue of Minerva enthroned is mounted atop a pedestal at right, next to a blooming rose bush. A near-contemporary copy attributed to Ranelagh Barrett (fl. 1737-68) , c. l739-45 (private collection), hung at Redlynch, Wiltshire, the house of Lord Ilchester. Barrett supplied several copies of pictures for Lord Ilchester's collection at Redlynch (Einburg 2016, p. 8, fn. 5). It was the copy at Redlynch that Horace Walpole saw, the protagonists in that picture identified by or to him as 'Charles Duke of Marlborough, Lord Hervey, Mr Winnington, Mr Fox and Lord Ilchester, and Desaguliers, in one piece; a copy from one by Hogarth, in possession of Lord Hervey' (Walpole in Toynbee 1928, p. 44). Thus the parson in this picture is usually identified as the Reverend John Theophilus Desaguliers (1683-1744), natural philosopher, clergyman, engineer and freemason. Most recently the art historian Elizabeth Einburg has proposed he is the Revered Conyers Middleton (1683-1750).