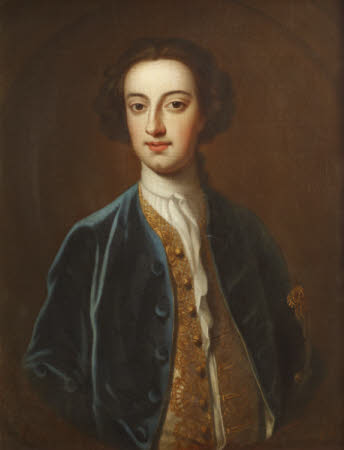 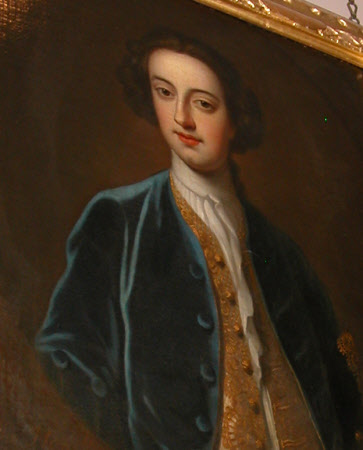 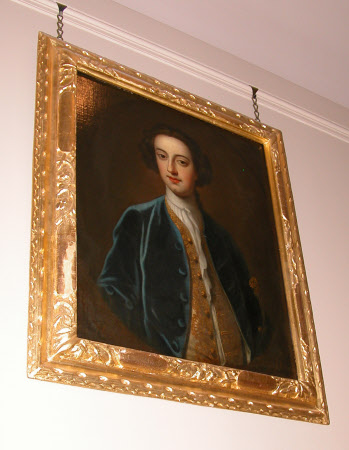 Oil painting on canvas, The Hon. Felton Hervey (1712-1775) by John Fayram (active c.1713–d.1744), circa 1730. Inscribed at bottom 'The Honble Felton Hervey. A painted oval half-length portrait of a young man, facing, gazing at the spectator, brown eyes, dark short hair or wig, wearing a deep blue velvet coat and white and gold brocade waistcoat with gilt buttons, and a white lace cravat, holding a cocked hat under his left arm. Apparently a pair with portrait of Thomas Hervey. He was the ninth and youngest son of John Hervey, 1st Earl of Bristol (1665–1751), the eighth by his second wife, Elizabeth Felton. Married on 25 December 1740 Dorothy Ashley, daughter of Solomon Ashley and widow of Charles Pitfield of Hoxton; she died in 1761. Apart from being dismissed as one of Queen Caroline’s equerries he appears to have led a respectable life. He died shortly after his return from a tour of Italy (1772–73) with his son and one of his daughters. They met up with his nephew, Colonel William Hervey (see NT 851784) on 10 September 1772 in Florence, where early in November he was presented to the Grand Duke, and by December had been painted by Zoffany, who inserted his portrait in a prominent position into the Tribuna, sitting in front of the Venus of Urbino, in conversation with Sir Horace Mann and Thomas Patch. In April 1773 he had an audience in Rome with Pope Clement XIV, and was “quite charmed by him” .After his death his considerable collection of pictures was sold at Christie’s, ‘from his mansion at Bury’, 3 and 4 February, 1775. He was also Groom of the Bedchamber to the Duke of Cumberland, and from 1759, Joint Remembrancer of the Court of the Exchequer with his son, Lt.Col.Felton Lionel Hervey, who married Selina Elwell, daughter of Sir John Elwell Bt and Selina Bathurst in 1779. Their eldest son, Felton Elwell, Colonel, and ADC to the Duke of Wellington at Waterloo, added the name of Bathurst to his own in 1801, and in 1818 was made a baronet, with special remainder to his brother, Frederick Anne, from whom the Hervey-Bathurst baronets descend. Felton was the best of the brothers in that after an inauspicious youth he never worried his father more and he led an exemplary life. He went to court as a page to Queen Caroline, but was apparently dismissed for misconduct. He had a private tutor before going to Eton 1727–30; he was sacked [expelled] from the school. He became Her Majesty’s equerry in 1736, and also attended the Duke of Cumberland abroad in 1743 as his Groom of the Bedchamber. He was MP for Bury St Edmunds from 1747–61 and lived for some of his time at the Manor House, Bury St Edmunds which he inherited from his mother in 1741. His wife was Dorothy, daughter of Solomon Ashley of Westminster, widow of Charles Pitfield of Hoxton. She died in 1761 & was buried in Bury St Edmunds but on Felton’s death her remains were removed to Ickworth. There were three daughters, Amelia, Caroline & Eloisa, and a son Felton Lionel Hervey. He inherited The Manor House in Bury St Edmunds from his father, but shot himself in a London gunsmith’s shop in the Strand in 1785. In Egham church is a monument to Felton Hervey’s grandson, Sir Felton Elwell Bathurst Hervey who was ADC to the Duke of Wellington at the Battle of Waterloo, he lost an arm in the campaign and died in 1819 age 36.

Presumably commissioned by the sitter’s father, but only another portrait of him is listed in the 1st Earl’s ‘Book of Expences’ (Diary, p.163): 1734 April 10. Paid John Fayram the painter seven pounds for my son Felton’s picture [it cannot be this picture, since £7 is what Fayram charged for a ‘½ length’ [as in ¾ length]; the sitter here is also surely younger than 22 or 23]; thence by descent and inheritance to the 4th Marquess (1863–1951) after the death of the 3rd Marquess (1834-1907), after which accepted in lieu of tax by HM Treasury, along with Ickworth and the rest of its contents, and transferred to the National Trust in 1956