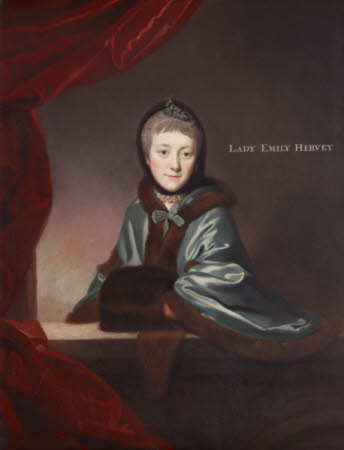 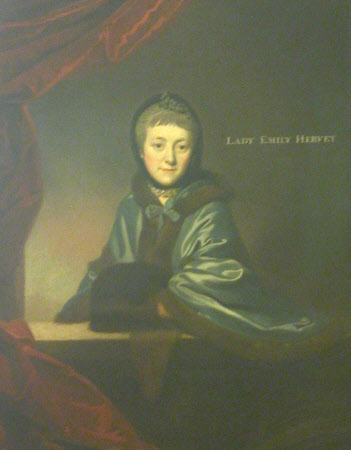 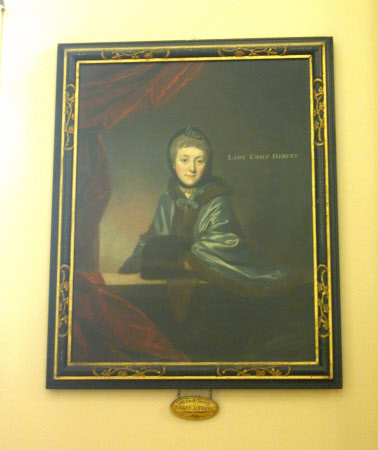 The sitter was the third daughter of John, Lord Hervey (1696-1743) and Mary Lepel, daughter of Brig.General Nicholas Lepel. She owed her names to her three godparents: George II’s daughters, the Princesses Emily [Amelia] and Caroline, and the Prince of Orange (husband of another daughter, Princess Anne). Both she and her sister, Caroline, remained single and both lived into their 80s. They were buried at Preston near Brighton in Sussex. Although accepted by most scholars as an autograph work, little more than the head can be by Zoffany, and the inferiority of the drapery suggests that it was done by an assistant. The format of the picture appears to be based on that of the small-scale portraits by Tournières, but the sitter’s dress also suggests an allusion to prints of fancy pictures of women as Winter. If an actual print was copied, such a mechanical task could have been left to an assistant.

Oil painting on canvas, Lady Emily Caroline Nassau Hervey (1734-1814), attributed to Johann Zoffany, RA (Frankfurt am Main 1733 - Kew 1810), circa 1765. Inscribed 'Lady Emily Hervey'. A half-length portrait of a woman, turned slightly to the left, gazing slightly to the right, behind a balustrade on which rest her hands tucked in a muff; she wears a blue satin fur-lined cloak tied at the neck with a bow, a string of pearls and a brooch of green stones at centre of headdress: black hood; red draped curtain on left.

Accepted in lieu of tax by HM Treasury, and transferred to the National Trust in 1956