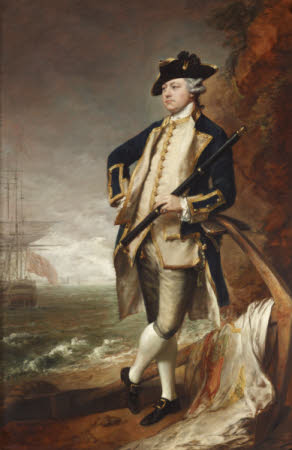 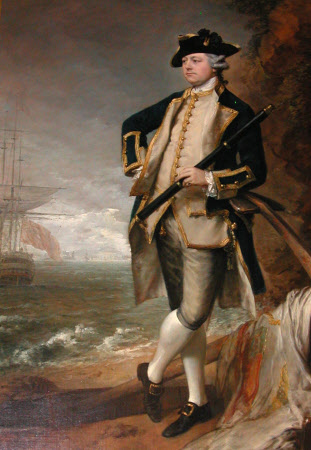 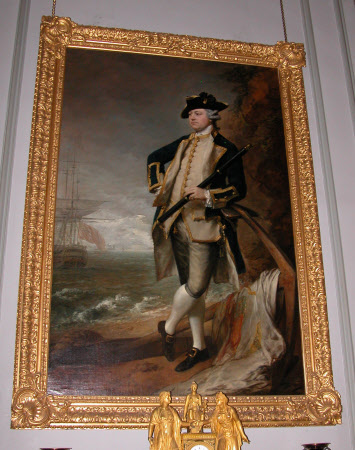 Gainsborough is less frequently associated with military or naval portraits than Reynolds, and this picture perhaps enables one to see why. Despite uniform, setting and props, the sitter remains first and foremost the gentleman. When this portrait was painted, Hervey’s active life at sea had in fact ended. As a younger son, he had to make a career, and he had been an assiduous naval officer. His naval and amorous activities are breezily recounted in his diaries for 1746-59. The picture alludes to what the future Lord Bristol must have regarded as the most distinguished action of his career: the taking of Moro Castle, at the entrance to Havana, in 1762. Gainsborough is credited with an octagonal miniature painting (also at Ickworth) of his illegitimate son with Kitty Hunter.

Oil painting on canvas, Commodore the Hon. Augustus Hervey, later Vice-Admiral, and 3rd Earl of Bristol (1724-1779) by Thomas Gainsborough RA (Sudbury 1727 - London 1788), 1767/68. A full-length portrait of a man turned to the left, gazing to the left, wearing naval uniform, dark blue coat with gold braid, cream waistcoat with gilt buttons, his legs crossed, his left arm with telescope, resting on a rusty anchor draped with the Spanish ensign; cliffs right, the sea, left, with a warship at anchor, and on the horizon the Moro Fort, Havana.

Gainsborough is less frequently associated with military or naval portraits than Reynolds, and this picture perhaps enables one to see why. Despite uniform, setting, and props, the sitter remains first and foremost the gentleman, as easy on the seashore leaning upon an anchor as he would have been in the Assembly Rooms at Bath - the city in which it was probably painted (Gainsborough's studio was there then, and we know that Hervey, as he then was, was there for his gout in 1767) -with his elbow on a chair. Since he was ashore, this was no doubt to the liking of the sitter, who wrote around then in his Journal, about an earlier period: "I cared very little about anything but my pleasures in these days, till I got to sea, and then my profession was all my pleasure" Not that Lord Bristol was in any sense a salon sailor. As second son of John, Lord Hervey, eldest surviving son of the 1st Earl, he had to make a career, and he was an assiduous naval officer, entering the Navy as "Captain's servant" to his uncle William Hervey, and ending his sea-faring as Captain of the Centurion in 1763. From 1771 to 1775 - when he resigned on succeeding to the title - he was a Lord of the Admiralty, and in 1778 he was promoted Vice-Admiral of the Blue. His naval and amorous activities are breezily recounted in his transcribed diaries for 1746-1759. The present picture, which was exhibited in 1768, is thus retrospective. It alludes to what the future Lord Bristol must have regarded as the most distinguished action of his career: his part in the taking of the Moro Castle, commanding the entrance to the Havannah (Havana), capital of the then Spanish-owned Cuba, in the Seven Years' War, in 1762. This had already been commemorated at the time, in a portrait by Reynolds given to Bury St. Edmunds, for which he was M.P. (Manor House Museum, ibid.). Hervey was given the honour of taking the news back to England, and on the way captured a large French frigate laden with military stores. The ship must be his command, The Dragon, a new one of 74 guns; the Spanish ensign cast down on the anchor commemorates the defeated navy. The 3rd Earl of Bristol's amorous and matrimonial career ran less smoothly than his naval one, which helps to account for the somewhat irregular descent of this picture. In 1744 he entered upon a clandestine marriage with the already notorious Elizabeth Chudleigh, which he collusively allowed her to disavow by a suit of jactitation in 1769, so that she could bigamously marry the Duke of Kingston. In 1751, his flight from an entanglement with the wife of M. (de) Caze prevented his returning to Paris with his naval uniform and a drawing of his ship, as promised, for Gravelot to finish the conversation-piece that he had begun in collaboration with Liotard (also now at Ickworth, completed by an English hand). From about 1763 to 1765 he had a liaison with Kitty Hunter, previously the mistress of the 10th Earl of Pembroke (to whom Hervey gave a portrait of himself by Reynolds in 1763), and later the wife of Field-Marshal Sir Alured Clarke, by whom he had an illegitimate son, Augustus Hervey (c.1765-82), an octagonal miniature of whom by Gainsborough is also at Ickworth. It seems to have been his desire to marry a Miss Moysey, a daughter of Gainsborough's physician at Bath - a liaison that he was subsequently to deny - that led him in 1768, first to attempt to gain a divorce from Elizabeth Chudleigh, and then - when she would not suffer this - to collude with her in denying that the marriage existed. His final liaison, which began around 1771, was with Mary Davis (c.1735-1835), wife of the banker Alexander Nesbitt, the subject of two Reynolds portraits painted for Lord Bristol in 1781 - in the Wallace Collection and (appropriately, as Circe) in the Smith College Museum of Art, Northampton, Mass., respectively - and apparently of a number of pastels or drawings by Liotard . It was to her that he left an estate of £1,200 p.a. in Yorkshire, and all his personalty, which will have included this portrait. She in turn seems to have kept up close relations with the descendants of Constantine Phipps, 1st Baron Mulgrave, and his wife, Lady Lepell Hervey, the sitter's sister, and to have given or left them a number of pictures of or associated with herself and the Earl of Bristol. Notes: (i) Augustus Hervey's Journals: 1746-1759, ed. David Erskine, 1954, p.294. (ii) See the letter from J-J. Vial in Nice to J-E. Liotard of 14 Dec. 1775, passing on the Earl's invitation to him to come to Nice to complete his portrait, and to paint him with a lady whom he had painted many times before: Renée Loche & Marcel Roethlisberger, L'opera completa di Liotard, 1978, p.100, under no.119. (adapted from author's version/pre-publication, Alastair Laing, In Trust for the Nation, exh. cat., 1995)

Commissioned by the sitter, and seen in his house in St. James's Square by Horace Walpole, by whom singled out as: "very good. one of the best modern portraits I have seen. It is at Ld Bristol's in St. James's square".; Mary Davis, Mrs. Nesbitt (d.1825), Norwood Ho., Streatham; Anne Phipps, Lady Murray (d. 1848), by whom inserted, with other pictures, into the sale of Joseph Robins, Christie's, 21-22 February 1834, lot 83 (bought in); again, at Hoard's, 9 May 1835, lot 106; and at Deacon's, 9 May 1838 (bt. Lockyer for 65 gns.); offered by Lockyer to Earl Jermyn (later 2nd Marquess of Bristol), who refused it but referred the offer to his father, the 1st Marquess (1769-1859), the sitter's nephew, who evidently bought it; first recorded as in the possession of the Marquess of Bristol by G.F. Fulcher, Life of Thomas Gainsborough, R.A., 1856, pp.61 & 185; accepted in lieu of death duties by the Treasury in 1956. Loaned to the National Trust in 1956 under the auspices of the National Land Fund, later the National Heritage Memorial Fund, and then transferred to the National Trust in 1983.