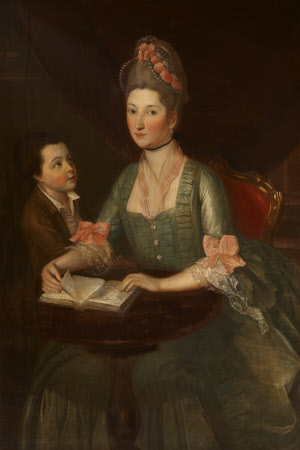 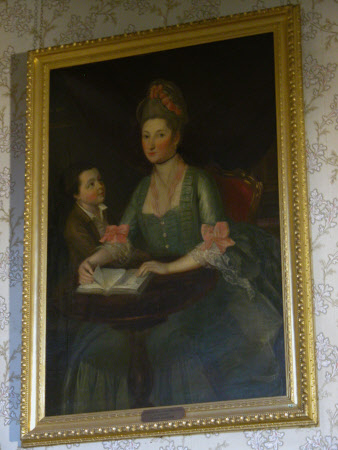 Oil painting on canvas, Theodosia Hawkins-Magill, Countess of Clanwilliam (1743 - 1817) with her Son, Richard, Lord Gilford, later 2nd Earl of Clanwilliam(1766 - 1805), attributed to Strickland Lowry (Whitehaven 1737 - Worcester c.1785), circa 1772. A three-quarter-length portrait of the daughter of Robert Hawkins-Magill of Co. Down and Lady Anne Bligh, and wife of John Meade who was created Viscount Clanwilliam and Lord Gilford in 1766 and Earl of Clanwilliam in 1776, reading an illustrated edition of 'Don Quixote' to her young son who succeeded his father in 1800. Her mother married secondly 1st Viscount Bangor.

purchased from Edward Ward, 7th Viscount Bangor, in 1967, with a grant from the Ulster Land Fund.

Countess of Clanwilliam and her son Lord Gilford (on frame)