The Family of Darius before Alexander 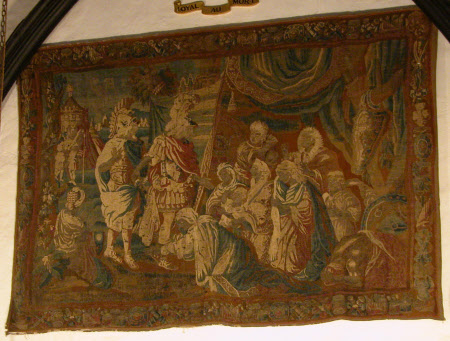 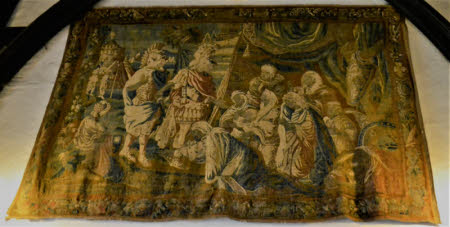 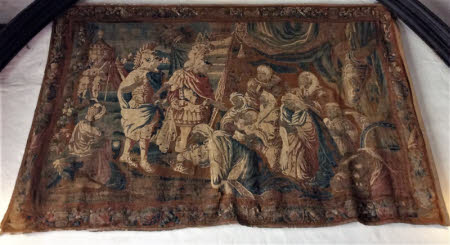 Tapestry, wool and silk, The Family of Darius before Alexander, La Marche, c. 1675-1690. Alexander and Hephaeston, standing and wearing armour and plumed helmets, are approached by the kneeling family of their defeated enemy Darius, before a large and ornate tent. The tapestry has borders with arms and trophies on all four sides. The overall reddish-brown tonality of the tapestry is a result of large areas of restoration which have discoloured.

‘The Family of Darius before Alexander’ is part of a series of the History of Alexander originally designed by Charles le Brun between 1660 and 1673 for Louis XIV, and woven at the Gobelins. Le Brun painted five full-scale paintings which served as models for the tapestries: ‘The Family of Darius before Alexander’, ‘The Triumph of Alexander’, ‘The Battle of Granicus’, ‘The Battle of Arbelles’ and ‘Alexander and Porus’. The compositions were so large that some of them were divided into sections to be woven, making a total of eleven tapestries. The Alexander series was the first major new tapestry commission of Louis XIV’s reign, and the tapestries were designed to compliment the King by comparing his virtues and achievements to those of Alexander the Great (Fénaille 1903-23, vol. 2, pp. 167-185). The success of the ‘Alexander’ series was such that the designs were quickly copied and adapted for weaving at lesser French workshops, including the town of Aubusson, which became a Royal Manufactory in 1665, and nearby Felletin, in the La Marche region of central France. The present tapestry was woven at one of these centres. The La Marche weavings of the ‘Alexander’ series are far coarser in quality than those made for the King at the Gobelins, and the designs are also significantly simplified and altered. They were probably based on engravings of the original series by Gérard Edelinck (1640-1707) and Gérard Audran (1604-1703) published in the 1670s. The cartoons used as models by the weavers were made by François Finet (1636-1706), an Aubusson painter whose inventory of 1690 included six small models for the series (Pérathon 1886, pp. 462-464). The Aubusson and Felletin ‘Alexander’ tapestries were very popular and continued to be woven well into the eighteenth century (Bertrand 1981; Chevalier, Chevalier and Bertrand, 1988, pp. 68-74). There are three further tapestries from the La Marche weavings of the ‘Alexander’ series in the National Trust’s collections: a ‘Triumph of Alexander’ and a ‘Battle of Granicus’ at Tattershall Castle (nos. 579422.1, 2), and another partial ‘Triumph of Alexander’ at Westwood Manor (no. 222728). (Helen Wyld, 2013)