Andromeda and the Sea Monster 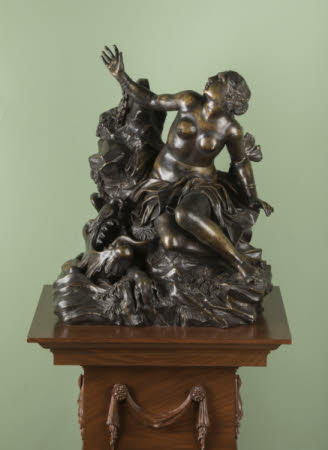 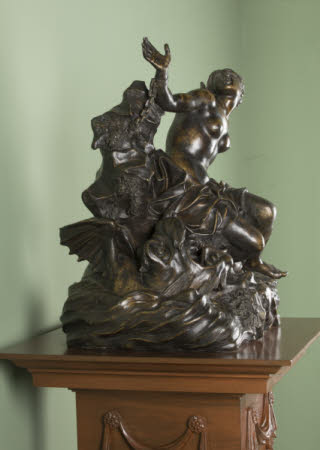 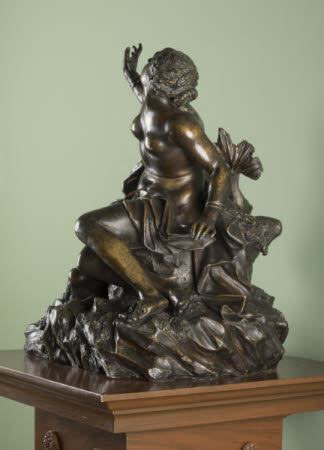 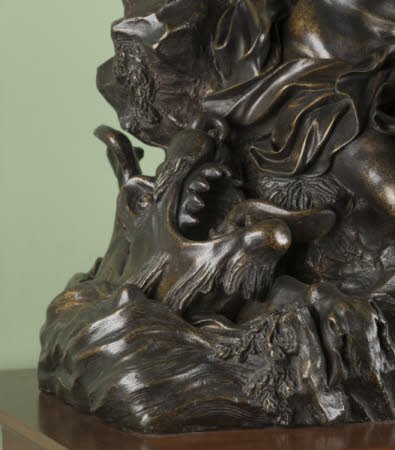 Andromeda, princess of Ethiopia, is chained upon a rock in sacrifice to Poseidon, imploring the hero Perseus to save her from a sea monster. This painted lead sculpture, thought for centuries to have been cast in bronze, is after a full-size marble carved by Domenico Guidi for Francesco II d'Este and was later bought by John Cecil, 5th Earl of Exeter, for Burghley House. The miniature version at Osterley may have been cast from Guidi’s original terracotta model and was first recorded in the 1782 inventory of Osterley Park on the Great Staircase, where it can be seen today.

Painted lead, Andromeda and the Sea Monster, after Domenico Guidi (Carrara 1625 - Rome 1701), after 1694. The half-naked Andromeda is chained to a rocky ledge, she stretches her arm and lifts her gaze imploringly upwards. We must imagine towards Perseus, who is approaching riding the winged horse Pegasus. The monster, which will shortly be slain by Pegasus with the help of the Gorgon Medusa’s head, emerges next to Andromeda from out of the foaming waters, his serpentine body surrounding the rock behind her.

This group is first recorded in the 1782 inventory for Osterley, when the sea monster was described as a lion. The sculpture was then and for a long time subsequently thought to be made from bronze, but it is in fact painted lead. It is a small version of a large marble group in the Metropolitan Museum of Art, New York (accession no. 67.34), which was commissioned from Domenico Guidi by Francesco II, Duke of Modena and Reggio (1660-1694), who died before the sculpture's completion. The sculpture was subsequently acquired in Rome by John Cecil, 5th Earl of Exeter (1648-1700) for Burghley House, Stamford, England, where it remained until 1958. It has also been attributed to Pierre-Étienne Monnot (1657-1733), who did much work for the 5th Earl. Although the basic compositions are very similar, there are nevertheless some significant differences between Guidi's marble and the smaller version at Osterley: the rocks and ground (terrasse) are quite different; the sea monster's front paws extend to the edge of the composition in the Osterley version; the monster's tongue sticks out. These differences might suggest that the Osterley version was cast from Guidi's original terracotta model for the sculpture. The modelling of this lead version, for example in the fingers of Andromeda's left hand, is as fine as might be expected in a bronze from the early 18th century. Jeremy Warren, 2017

First recorded in the 1782 inventory of Osterley Park on the Great Staircase: 'Bronze of Andromeda on a mahogany term'. Purchased from George Child-Villiers, 9th Earl of Jersey (1910-1998) by HM Government in 1949 for the Nation and vested in the Victoria and Albert Museum; transferred to the National Trust in 2002.