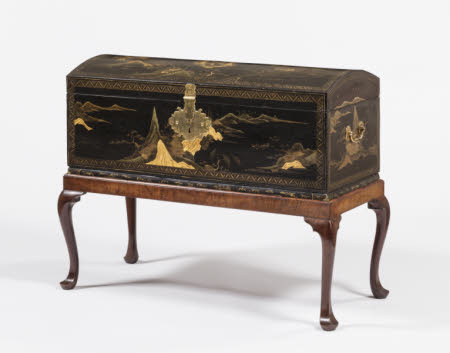 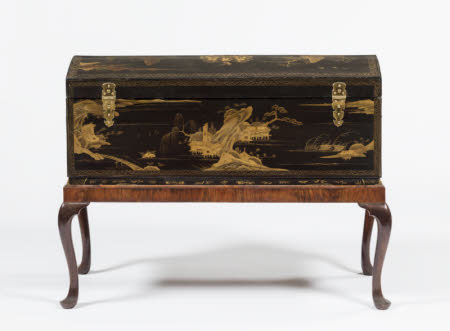 A domed lacquered coffer, Chinese Export, probably Guangzhou (Canton), circa 1715-20, raised on NT 771891.4.2, a walnut and walnut-veneered stand, English, circa 1725-40. Part of a larger, very rare, group of armorial Chinese Export furniture, including: ten hall chairs, four [NT 773356.1 - .4] owned by the Earldom of Jersey Trust, six [NT 771891.1.1 -.1.6] owned by the National Trust; a screen [NT 771891.2], a casket [NT 771891.3], a pair of coffers on stands [NT 771891.5.1 & .5.2] and a side table [NT 773362, also the property of the Earldom of Jersey Trust]. Of softwood, stained, and decorated in green, brown and gold lacquer against a black lacquer ground; the mounts of gilded brass. The domed lid centred by the coat of arms granted to Sir Francis Child (1642-1713) in 1700, 'gules, a chevron engrailed ermine between three eagles close each gorged with a ducal coronet or', before a foliate mantling, and topped by the crest of Child, 'on a Rock proper an eagle rising argent holding in the beak an adder proper', on a torse, and surrounded by a scene of pavilions, mountains and trees in a watery landscape. The front decorated with mountains, and mounted with an elaborate escutcheon and hasp, engraved, shaped and edged with scrolls. The escutcheon with scallop shell terminals. The ends each with a bale handle fixed with an engraved oval backplate. The decoration to front, sides and lid within a border of repeated splayed elongated leaves forming a chevron, between the leaves a delicate stalk or sprig of stylised foliage, all within gold lines. The coffer with a highly unusual vestigial 'skirt' at its base, of ovolu profile, also lacquered and decorated in gilt with sprigs of foliage and with hatched reserves at the ends, the hatching rendered with flowerheads of four elongated oval petals. The lacquer refreshed and over-painted in places.

Possibly one of the four 'Japanned Chests on frames' listed in the 'Passages' at Osterley when an inventory was taken there in 1782. By descent as a Child Family heirloom, until purchased from George Child-Villiers, 9th Earl of Jersey (1910-1998) by HM Government in 1949 for the Nation and vested in the Victoria and Albert Museum; transferred to the National Trust in 2002.