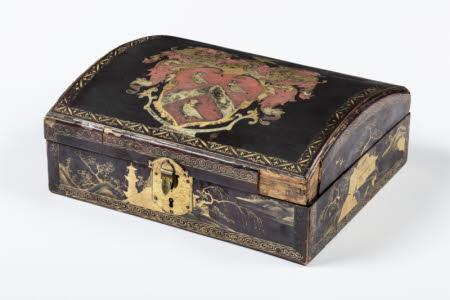 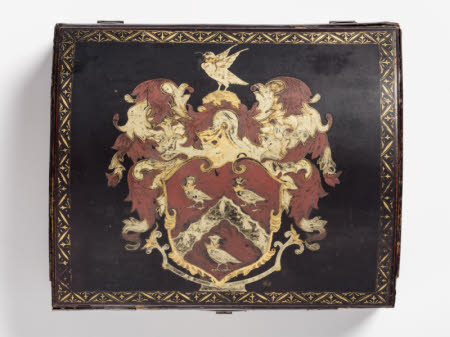 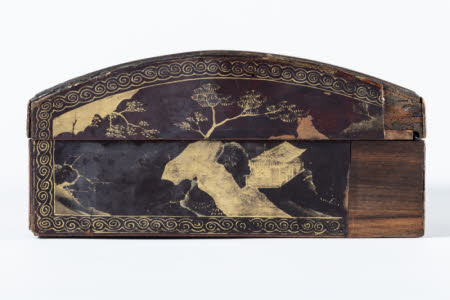 A dressing or toilet box, Chinese Export, probably Guangzhou (Canton), circa 1715-20. Part of a larger group of sixteen pieces of armorial Chinese Export furniture at Osterley, comprising ten hall chairs [NT 771891.1.1-.6 owned by the National Trust; NT 773356.1-..4 the property of the Earldom of Jersey Trust]; a side table [NT 773362]; a screen [NT 771891.2]; a single chest on later stand [NT 771891.4] and a pair of chests on later stands [NT 771891.5.1 & .5.2]. Of black lacquer atop substrate, and softwood and oak. The hinges and escutcheon of lacquered brass. The domed cover decorated to its centre with the arms of Child, as granted in 1700, 'gules, a chevron engrailed ermine between three eagles close each gorged with a ducal coronet or', before a foliate mantling, beneath the crest, 'on a rock proper an eagle rising argent holding in the beak an adder proper', on a torse, within a border of repeated splayed, elongated leaves forming chevrons, between the leaves a delicate stalk or sprig of stylised foliage, all within gold lines. The front, sides and rear of the box decorated with landscape scenes, including pavilions among trees and rocky crags and at the edge of lakes, and all with a border of 'S'-scrolls. The interior black-lacquered.

Lacquered objects decorated with a family’s coat of arms were exclusively the preserve of early 18th century England’s richest men, the millionaires who amassed spectacular fortunes from trade, speculation and investment in emerging markets, and the aristocrats who knew them or were their clients. Made in Guangzhou (Canton) in China, specifically for export, lacquered armorial furniture was only available via the East India Company, the chartered British concern with a monopoly on trade with China. English families commissioned a range of objects bearing their arms [1] – porcelain, textiles and different types of furniture – but remarkably, Osterley is the only place where such a large and diverse group has survived together, in the house of the family for which it was made. That sixteen pieces of armorial furniture have remained together, protected in law as heirlooms, is a measure of their rarity and value, and of the esteem in which they were held.[2] Lacquer is a decorative technique which was perfected by Japanese and Chinese artists, involving the building up of layers – on a timber or other substrate – of the sap of the Rhus vernicflua tree. The lustrous surface which results provides the perfect background for decoration in gilt and colours. By 1720, articles of lacquer for export were being made in Guangzhou and were largely the preserve of the private trade in which East India Company captains, investors and directors were authorised to engage, alongside carrying out the official trade of the Company. Captains, crew members and overseers called ‘supercargoes’ were allowed to reserve a portion of the ships’ tonnage for their own goods, or goods which they had been commissioned to buy. Families who commissioned goods from China bearing a coat of arms had first to send a tracing of that coat to China. This was not the only means by which the influence of English consumers was brought to bear on the form and decoration of export wares, particularly where furniture was concerned. As early as 1702, when the London Company of ‘Joyners’ petitioned for the importation of Asian lacquer – because it threatened their own livelihoods – to cease, their complaint was not that Chinese furniture was being brought into England, but that Chinese furniture made after English models was being brought into England. Amongst the goods imported from China 'within these Four Years' were 'Four thousand one hundred twenty Dressing, Comb and Powder Boxes...'. These things, they complained, were made to suit English tastes, since ‘several merchants…[had] procured to be made in London…and sent over to the East Indies, Patterns and Models of all sorts of Cabinet Goods.'[3] This exchange produced furniture which is a complex bicultural amalgam. The furniture followed English fashions and forms but was made with Chinese joinery and decorated with Chinese lacquer. To complicate this picture still further, the timber used to make furniture in Guangzhou was often imported into China from other parts of Asia by East India Company ships.[4] If the number of imported dressing boxes listed in the Joiners' complaint is to be believed, then they must have been very popular amongst English buyers. The number of these that, in turn, were decorated with coats of arms, like the box at Osterley, it is impossible to say, since it appears to be the only one of its type known to survive. The Tower family of London and Huntsmoor Park, Buckinghamshire, ordered '1 dressing box' as part of a larger order of armorial furniture and porcelain sometime between 1728 and 1730,[5] but its whereabouts are unknown. Dressing boxes were normally recorded in inventories in pairs and associated with a dressing or toilet mirror and a dressing table. How or where the Osterley box was used is difficult to determine, since none of the many japanned boxes listed in the inventory taken there in 1782 are specifically described - unlike the lacquered chairs - as bearing the family coat of arms. The most compelling candidate - 'an India box with nice figures' - was in the Blue India Paper Dressing Room. A screen at Osterley, possibly the eight-fold Chinese Export lacquer screen which also bears the Child arms, is described exactly the same way, as an 'India folding screen with nice figures'.[6] The box was in the Entrance Hall in 1915 but at some point thereafter left the house, until it appeared at auction - and was bought by the National Trust and returned to Osterley - in 2007.[7] Megan Wheeler, October 2019 [1] See, for instance, the will of Martha Page (d. 1729), the widow of Sir Gregory Page (d. 1720), which records a ‘square Japan table / with the coat of arms’ as well as ‘1 paire small [mugges] with armes’ (see National Archives, PROB 11/628/300). Two sets of Chinese armorial chairs (not mentioned in Martha Page’s will) also survive bearing the family’s arms. The first set, very similar to the lacquered chairs at Osterley, dates from circa 1714-20 (see A. Bowett, Early Georgian Furniture 1715-40 (2009), pp. 154-5 and Fig. 4:16. The second set, of rosewood inlaid with mother-of-pearl are in the Soane Museum (see H. Dorey, ‘A Catalogue of Furniture in Sir John Soane’s Museum’ in Furniture History XLIV (2008), 47-50.) Many more examples of armorial porcelain than furniture are known. [2] A seventeenth piece, also bearing the arms of Child, and probably a pair to the single small chest now in the Gallery at Osterley (NT 771891.4) was sold Sotheby’s, 3 July 1997, Lot 16. The existence of this chest makes it possible that the set was once larger. [3] Kyoungjin Bae, Joints of Utility, Crafts of Knowledge: The Material Culture of the Sino-British Furniture Trade during the Long Eighteenth Century (PhD Thesis, Columbia University, 2016), pp. 23-4. [4] ibid., pp. 26-46. [5] See P. Ferguson, 'Chinese Armorial Wares for James Brydges, 1st Duke of Chandos: Self-Fashioning or Artifice?' (Transactions of the Oriental Ceramic Society, vol. 82, 2017-2018, pp. 37-47), 37. [6] M. Tomlin, ‘The 1782 Inventory of Osterley Park’ in Furniture History XXII (1986), pp. 113-114. [7] Sold Sotheby’s, 10 September 2007, Lot 286.

Presumably purchased by the Child family of London and Osterley, circa 1715-20. Recorded in the inventory taken at Osterley in 1915 in the Entrance Hall. Thence sold, until purchased by the National Trust at Sotheby's, 10 September 2007, Lot 286.