Osterley Park's 'Japanned Chairs with the Family Arms' - circa 1715-20 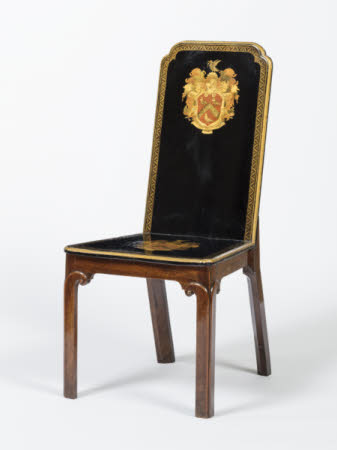 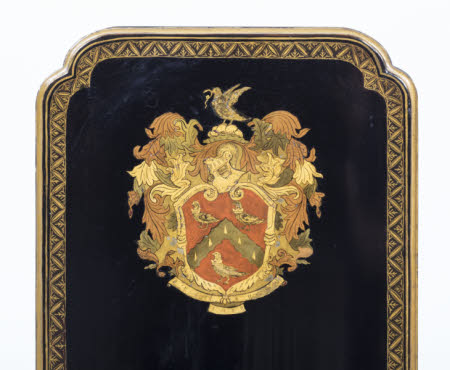 An armorial hall chair, the back and seat of lacquer, Chinese Export, probably Guangzhou (Canton), circa 1715-20. The walnut-veneered oak base, English, late 18th/early 19th century. One of a set of ten. Six [NT 771891.1.1 -.1.6] owned by the National Trust; four [NT 773356.1-.4] owned by the Earldom of Jersey Trust. The ten chairs part of a larger, and very rare, group of sixteen pieces of armorial Chinese Export lacquer furniture at Osterley comprising ten chairs, a screen [NT 771891.2], a casket [NT 771891.3], three coffers on stands [NT 771891.4.1 and .5.1 and .5.2] and a side table [NT 773362, also the property of the Earldom of Jersey Trust]. All bearing the coat of arms granted to Sir Francis Child (1642-1713) in 1700, 'gules, a chevron engrailed ermine between three eagles close each gorged with a ducal coronet or', before a foliate mantling, and topped by the crest of Child, 'on a Rock proper an eagle rising argent holding in the beak an adder proper', on a torse. Of softwood, the back and seat joined together with dovetails. The underside of the seat covered in a plain matt red lacquer on top of a substrate. Each chair with a chiselled Roman numeral; this chair marked 'X'. The back rectangular, with re-entrant top corners, and with a thumb-moulded edge picked out in gilt. The seat tapering from front to back, and with the same thumb-moulded edge picked out in gilt. The arms to both painted in a palette of red, silver and gold. Both back and seat with a border of repeated splayed elongated leaves forming a chevron, between the leaves a delicate stalk or sprig of stylised foliage, all within gold lines. The seat raised on a later base of oak rails veneered in walnut. The rear legs outswept and heavily chamfered. The front legs with integral upper scrolls forming ‘ears’. An edge-moulded rectangular board fixed (with screws) over the joint between the back and seat boards, to strengthen it.

Child Family Heirlooms. Listed in the Inventory taken at Osterley in 1782 as 'Eight Japanned Chairs with the family Arms' in the Vestibule Basement Story; the other pair in Mrs. Bunce's Room. Listed in the 1871 inventory as '10 Japd high back Hall chairs w coat of arms' in the 'Staircase and Vestibule'. Thence by descent; until given by George Francis Child-Villiers, 9th Earl of Jersey (1910-1998) in 1993.