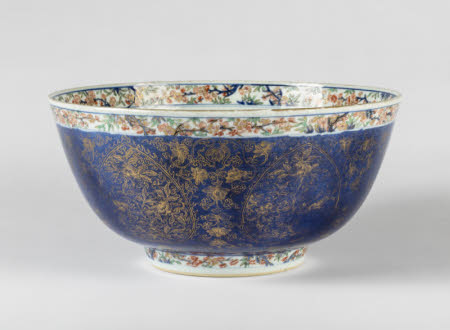 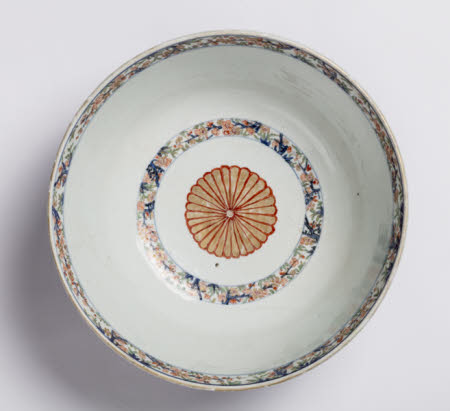 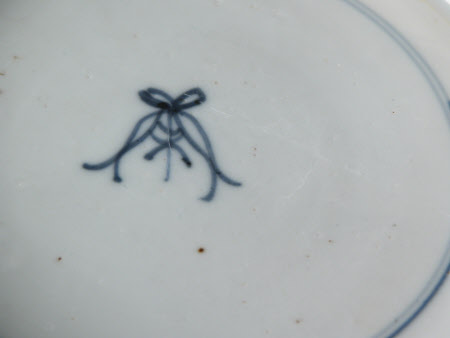 Punch bowl, porcelain, the exterior decorated with a broad powdered cobalt blue ground, the mouth and foot rim with narrow bands in 'famille verte' enamels including iron-red, two shades of green, yellow and manganese-purple, and gold, with prunus branches and bamboo leaves, the interior with a chrysanthemum-type 'mon' (family crest) surrounded by foliate bands repeated at the rim, the exterior is further decorated with flame-bordered panels in gold of Islamic-inspired design with foliate lotus motifs, alternating with foliate scroll work, double fish mark on base painted in underglaze blue; China, Jingdezhen, c.1695-1715.

This large punch bowl may have been made for the Indo-Islamic market in South East Asia suggested by the gilt decoration on the powdered blue ground, but arrived in England as incidental trade. European merchants were always on the lookout for curious patterns and novelties. The translucent overglaze enamel pigments are in the so-called 'famille verte' palette, which was a refinement of the 'wucai' (five colour) enamels popular throughout the 17th century. The base is marked with a double fish mark in underglaze blue introduced during the Kangxi emperor's reign. There are two dishes (PO 4277 & PO 3093 ) in this pattern in the Porzellansammlung, in Dresden, first recorded there in 1721, acquired by Augustus the Strong. Patricia Ferguson, 2019

On the base is a mark twin fish