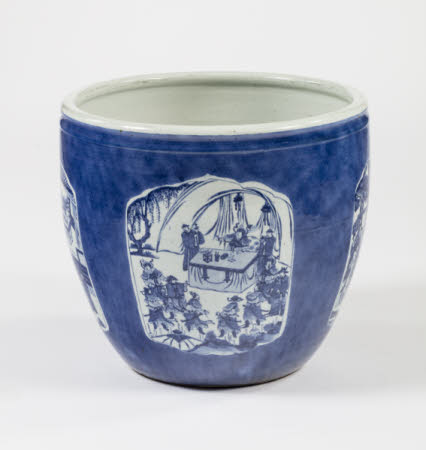 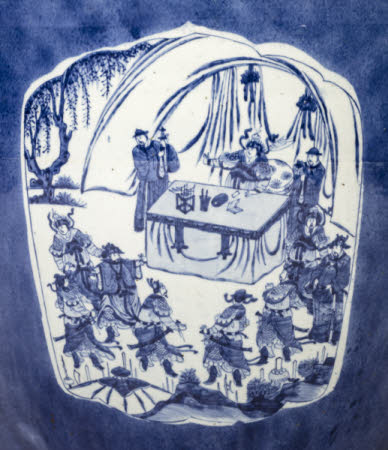 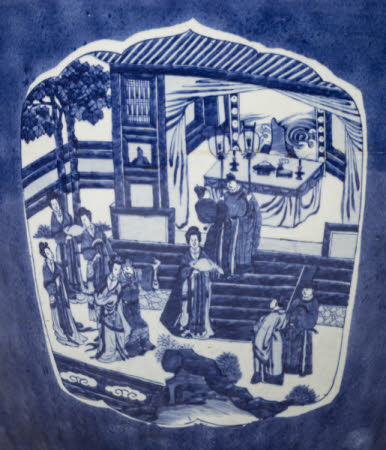 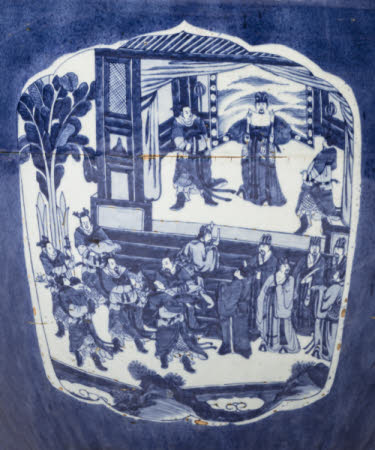 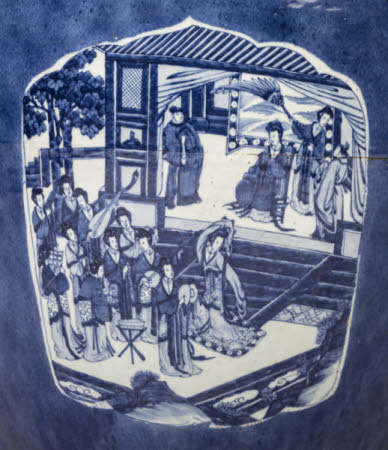 Fish bowls, a pair, porcelain, heavily potted, the exterior painted in underglaze cobalt blue with four scenes capturing Chinese court life with musicians and dancers performing for male or female dignitaries and other courtiers or seated officials in discussions with advisers on the steps of a palace leading to a garden, within recessed cartouche-shaped reserves, resembling garden pavilion windows, against a powdered blue ground, the interiors undecorated, China, Jingdezhen, circa 1695-1715.

These large fish bowls were made around 1695–1715 in the kilns at Jingdezhen, in Jiangxi province, south China, where since the 14th century most export porcelain was mass–produced. In the 17th century, fishbowls were a feature of elite Chinese homes, displayed outdoors in a courtyard on a wooden stand and filled with pet goldfish and some vegetation. In Feng Shui, goldfish were considered auspicious, attracting abundance, wealth and prosperity, as well as good energy. The painted scenes which have not been identified are probably based on woodblock illustrations in novels produced in Suzhou, probably based on stories from the Han dynasty (202BC-220AD) popularised by the Song dynasty painter Qiu Ying (c.1494-c.1552), in his scroll-painting 'Hangong chunxiao tu' ('Spring Morning in the Han Palace'), demonstrating the strong sense of historical continuity in Chinese art. The Chinese literati and elite merchants, the market for these wares, would have recognized the subjects. The mottled or powdered blue decoration was applied to the unglazed white body, masking out the four reserved cartouches for the scenes, by blowing powdered cobalt through a bamboo tube with a filter. Then, the complex scenes were hand–painted, and the large object was glazed and fired. In China, this technique is known as 'chuiqing' ('blown blue') and in France, in the 19th century as ‘bleu soufflé’, in earlier English descriptions it may have been described as ‘clouded’. It was only produced for a very short time during the reign of the Kangxi emperor (r. 1662–1722), as it was laborious and therefore costly. The technique was employed earlier in the 17th century on wares for the Japanese market. A similar decorative scheme to the Osterley fish bowls is found on a pair of jars at Dunham Massey (NT 929295). These fish bowls were imported into England and Europe along with the precious, ornamental goldfish they contained. Goldfish were first recorded in England in 1691, but were routinely imported from China as private trade only from the 1730s, perhaps influenced by descriptions of the goldfish kept as pets by Chinese courtiers. The naturalist George Edwards noted that Charles Lennox, 2nd Duke of Richmond (1701–50), of Goodwood, Sussex, had a ‘large Chinese earthen Vessel full of these Fish brought to England’ and Horace Walpole famously bred goldfish at Strawberry Hill, Twickenham, in a similarly shaped vessel, as gifts for friends. However, many of these large fish bowls were soon adapted as garden pots for growing costly exotic plants, such as orange trees, in the garden during the summer months, which were removed to Orangeries in the winter, and sometimes displayed indoors. In 1702, the traveler and chronicler Celia Fiennes (1662–1741) observed in the Long Gallery at Hampton Court, four pairs of ‘great open jarrs … to put potts of orange and mirtle trees in’. Four similar fish bowls survive at Hampton Court (owned by the Royal Collection Trust), along another set of four, and another pair are in the private collection at Petworth House, West Sussex. Wealthy buyers may have purchased numerous examples to distribute the garden pots around formal garden as eye–catching focal points. Fragments of an earlier fish bowl were excavated in the garden at Het Loo, William and Mary’s palace in Apeldoorn in the Netherlands. Text adapted from Patricia F. Ferguson, 'Ceramics: 400 Years of British Collecting in 100 Masterpieces', Philip Wilson Publishers, 2016.