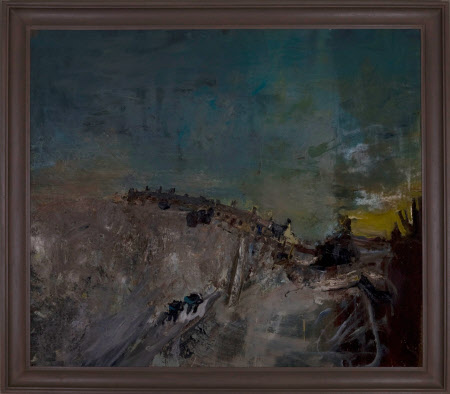 Oil painting on board, Catterline in Winter, by Joan Kathleen Harding Eardley (Warnham 1921 – Killearn 1963). An expressive oil on board painting of Catterline, a village on the North Sea Aberdeenshire coast, depicted in winter, probably at dusk. A field in the foreground at left with two people in the foreground at centre braced against an icy wind, walking towards the village. The row of buildings at centre included Eardley's own studio and lodgings. The artist lived and worked at Catterline from the early 1950s, dividing her time between the Scottish North East and her studio in the Townhead district of Glasgow. Exhibited 1964, ‘Joan Eardley RSA, 1921-1963’, Scottish Arts Council Memorial Exhibition, Kelvingrove, Glasgow and The Royal Scottish Academy, Edinburgh, no. 94.

Presented to the National Trust for display at Mottisfont Abbey by Derek Hill through the National Art Collections Fund (Art Fund), 1996.

END_OF_DOCUMENT_TOKEN_TO_BE_REPLACED

Joan Eardley's paintings in the Derek Hill Collection at Mottisfont