Architectural Capriccio with the Sacrifice of Iphigenia 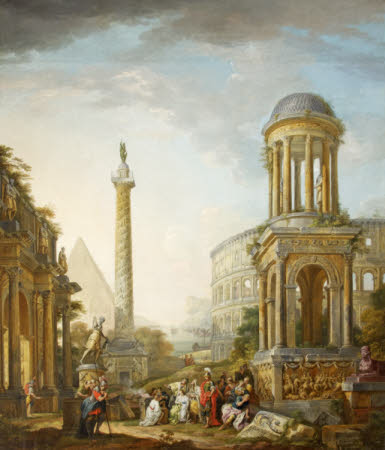 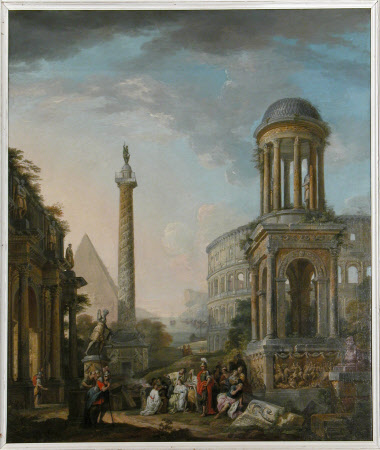 Iphigenia was the daughter of Agamemnon, king of Mycenae. According to Greek mythology, related by the Roman poet, Ovid, in his Metamorphoses, he sacrificed her to placate the goddess Diana, after killing one of her sacred stags, and in order to obtain favourable winds from the Gods to set sail to Troy. It was painted between 1745 -1758, when Henry Hoare, who commissioned the painting from the artist, paid him. The scene is a capriccio view, a fantastical view with a mix of known classical buildings of Antique Rome and Glanum in Provence.

Oil painting on canvas, Arcitectural Capriccio with the Sacrifice of Iphigenia by Francis Harding (fl.c.1730 - 1760), 1745 - 1754. An imitation of Giovanni Paolo Panini (1691 - 1765) set in a capriccio of Antique Rome and of Glanum, Provence. The upright view shows the Arch of Constantine on the extreme left in th foreground and Trajan's column in the centre. In the background on the left is the pyramid of Cestius. The Colosseum and the Mausoleum of the Giulii from Glanum in (now St.Rémy) Provence are on the right. In the foreground, the subject of the title, Iphigenia, daughter of Agamemnon, king of Mycenae is being sacrificed to the goddess Diana at Aulis, by Calchas, the priest of Apollo, whilst her father, in helmet and armour, looks on. The scene comes from Ovid, Metamorphoses 12:25-28. Horace Walpole thought that the figures were by Giacomo Amigoni (c.1682 - 1752) but the artist was only in England between 1729 and 1739.