Rachel sitting on the Household Gods of Laban 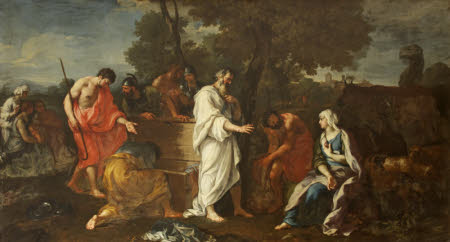 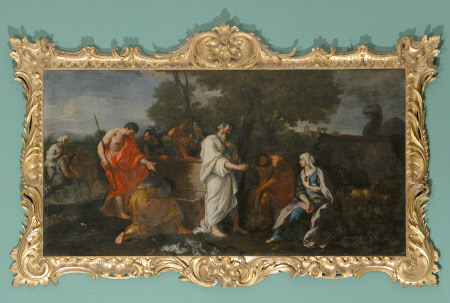 On her departure from the house of her father, Laban, Rachel stole scared figurines, ‘the household gods’, and hid them in a camel’s pack. Here she is concealing them from him by protesting her inability to get up due to her time of the month. Both she and her older sister, Leah, were married to Jacob, who was finally escaping to Canaan, after fourteen years of labour as payment for Rachel. After Laban discovers the theft he sets out in pursuit and soon catches up with them. Meanwhile his servants are searching a chest and Jacob is pointing out that he does not have the idols. The scene shows an episode from the Old Testament. Bought as a pair with The Sacrifice of Noah by Imperiali by Henry II Hoare, they were placed in the Picture Gallery built by Richard Colt Hoare at Stourhead and have remained there ever since.

Oil painting on canvas, Rachel sitting on the Household Gods of Laban by Francesco Fernandi, called Imperiali (Milan 1679 - Rome 1740), circa 1720. In the middle of a landscape, on their way home to Canaan, Rachel is seated, at the right, upon idols which she has stolen from Laban's house and hidden among the camel's trappings; behind whom stands a camel, on the right. Her father Laban, unaware of what she has done, stands in the centre addressing her, while a group of soldiers and other figures, including Jacob presumably search a chest behind him, on the left. The biblical scene shows an episode from the Old Testament book of Genesis 31:33-35.