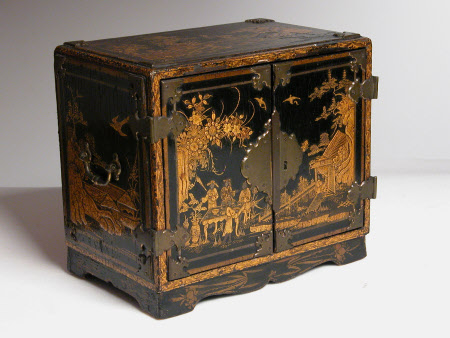 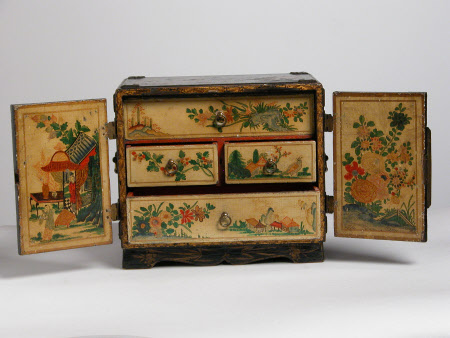 A black lacquer and brass mounted table cabinet, Japanese, late 17th century. The cabinet decorated on all sides with figures and buildings within Japanese gardens and with a pair of cupboard doors with brass hinge and lock plates enclosing a painted lacquer interior of two long centred by two short drawers, these decorated with polychrome figures, buildings and flora, raised on a plinth base with serpentine apron.

When lacquered objects made in East Asia first reached Europe in the early 16th century, they were highly prized for their flawless finish and light-reflecting qualities. Lacquer became available to European elites, along with other luxury items including silk and porcelain, once Portuguese explorers discovered a sea route to the East around the southern tip of Africa and across the Indian Ocean. The flow of goods increased in the early 17th century when the Dutch and English East India Companies began to bring goods to markets in Amsterdam and London. By 1700 many European country houses and palaces contained examples of East Asian export lacquer. During the 17th century, the Dutch dominated the Japanese trade. All over Europe, Japanese lacquer was regarded as superior in quality to all others. Europeans particularly prized Japanese lacquer in the form of cabinets with internal drawers, which were made especially for export. In European rooms they were often placed on table-height stands, this example is a table cabinet and would have been placed on furniture for decorative effect, the workman ship on this example is superb. A similar pair of cabinets in the Nationl Trust Collection can be seen at Penrhyn Castle, Gwynedd (NT1420063) For further discussion on East Asian lacquer and its export see: ‘Japanese Export Lacquer: 1580-1850’ by Christiaan Jan Adriaan Jörg and Oliver Impey 2005. Also 'A Treatise of Japaning and Varnishing’ by John Stalker and George Parker, 1688 James Weedon (April 2018)