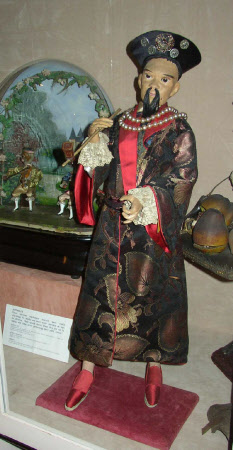 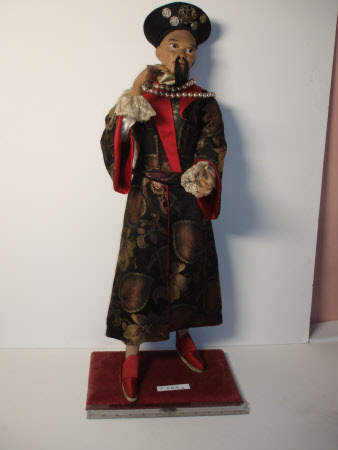 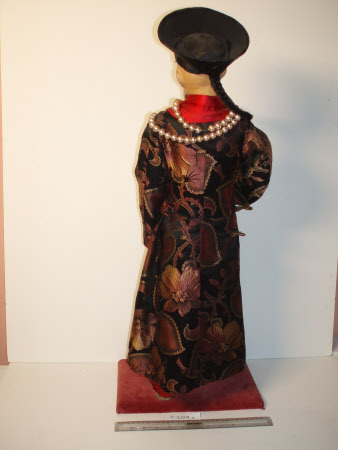 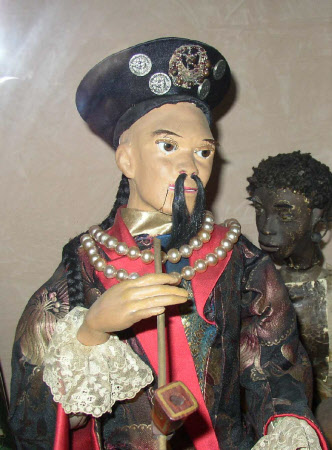 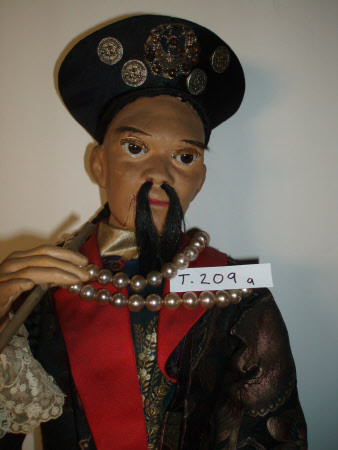 By means of tubes and bellows inside his body, this Chinaman automaton would appear to 'smoke' when a lighted cigarette was placed in his pipe. He is no longer allowed to do this, which possibly has helped him reach his present age of over 100.

An automaton (circa 1885) designed and manufactured by Gustave Vichy (1839-1904). Automaton consists of a composition head, arms, hands, legs and feet. The figure has inset brown glass eyes, black mohair eyebrows, moustache and pigtail. The clothing comprises: a black silk robe decorated with a pink and cream floral design and a red silk lining; a beige silk all-in-one outfit with pantaloon trousers, cream lace cuffs, and a silk floral design brocade panel on the chest; red silk shoes, black hat with a high brim which hides the crown, decorated with four silver coloured discs and a circular decoration made up of pink and transparent beads; large imitation pearl necklace. The figure holds a pipe, which can be raised to the mouth by an internal clockwork mechanism operated by a key. The lower jaw moves, opening the mouth to expose the teeth. According to the case label, when a lighted cigarette is placed in the pipe the figure puffs smoke from the mouth.

Automatons were enjoyed for both their mechanical ingenuity, the spectacle created by their movement, and as status objects for wealthy owners. The Frenchmen Gustave Vichy, born in 1839, was the first automaton manufacturer who, in his small factory, oversaw every step of the production process. The automatons combined a wide variety of materials, including glass, silk, metal, bisque porcelain, and mohair. Following the latest fashions, both in clothing and popular culture, formed an important part of their desirability.[1] This item uses – and replicates - late 19th-century European stereotypes of East and Southeast Asian peoples and cultural identities to trigger quick character recognition for Europeans. Asian cultures were often intermingled indistinctly in the European imagination and described as 'oriental' without any emphasis on cultural authenticity. The term, deriving from the Latin for ‘east’, established ‘the East’ (which was vague enough to stretch from Southeast Asia to North Africa) as an imagined antithesis to ‘the West’. Representations such as these perpetuate the othering of Asian people and do not reflect the diversity of this enormous geographical region. [1] https://mus-col.com/en/the-authors/10279/#exhibits, accessed online, 13/12/21.

Loaned to the Museum of Childhood by the Betty Cadbury Trust Sudbury in November 1993.