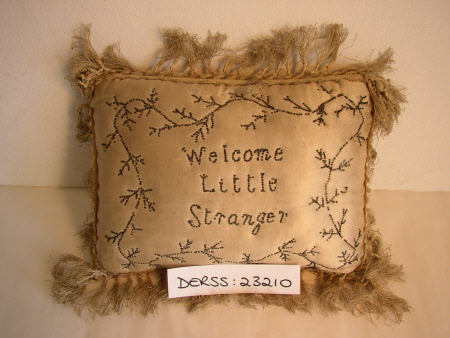 A rectangular cream silk pin cushion surrounded by a matching tassel fringe (19th century). The cushion is decorated with numerous haberdasher's pins forming a foliate border around the words 'Welcome Little Stranger' also made up of pins. Safety pins were not available until 1878 and therefore babies' clothes were fastened with tapes, ribbons, buttons or ordinary pins. Pins were expensive until the mid-19th century and therefore the gift of a pincushion full of pins was often given at a baby's birth. 'Welcome little stranger' was a popular motto. Pincushions were not given until after the birth, as it was believed that pins would increase labour pains ('More pins, more pain'). Pins often gave babies pain as they were frequently accidentally stuck into the infants.