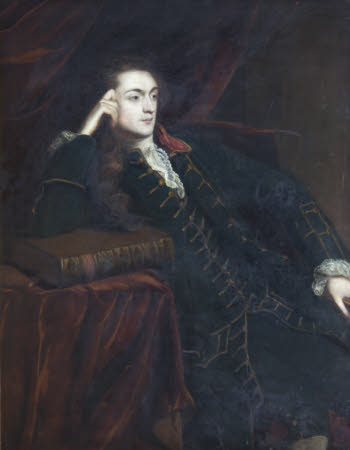 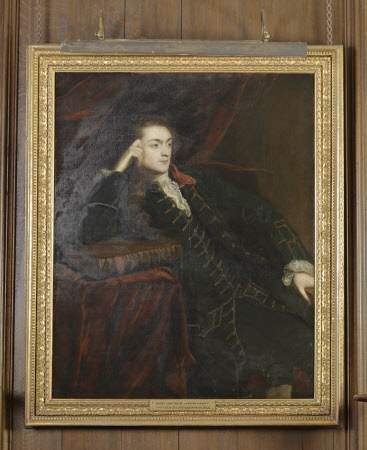 Oil painting on canvas, Bennet Langton (1737-1801) by Sir Joshua Reynolds, P.R.A.(Plympton 1723 - London 1792), 1759/61. A three-quarter-length portrait, seated to right by a table, head supported on his right hand, his elbow on a volume of Clarendon ('History') and The Prince of Abyssinia (Johannes Rasselas; published 1759). He is wearing dark blue coat, red collar, gold frogging, white cuffs and cravat, his long locks of hair falling over his shoulder. 1737-1801. Familiar in Boswell's biography as the friend of Dr.Johnson, whom he succeeded as Professor of Ancient Literature at the Royal Academy. He married in 1770 Mary Lloyd, widow of the 10th Earl of Rothes. Their second son, Peregrine, assumed the name of Massingberd after his marriage to Elizabeth, daughter of Henry Massingberd. Sittings are recorded in 1759,1761,1762. Payment (£21) before 1761. 'Mr Langton' appears on numerous occasions in Reynolds' pocket books and obviously not all these references are sittings. Nine appointments are recorded in the first half of 1760 and two in 1761. Subsequent entries occur.