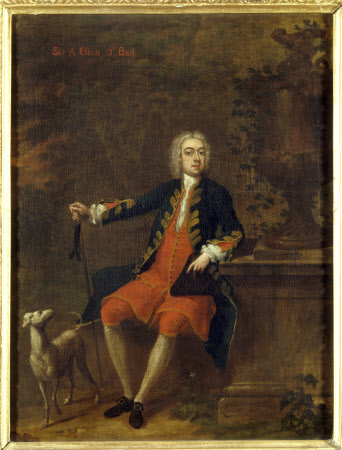 Oil painting on canvas, Sir Abraham Elton 3rd Bt (1703 - 1761) by Charles Phillips (1708-1747), signed and dated 1732 and inscribed Sir A. Elton 3rd Bt. A portrait of the son of Sir Abraham Elton, 2nd Bt and Abigail Bayly, as a young man, full length, seated, in a woodland setting, turned slightly to the left leaning with his left arm on a stone pedestal on which sits a tall stone urn with ivy hanging from it. He holds his hat which rests on his left knee, in his left hand, he has a long black cane with black hanging ribbons which he holds on top with his arm outstretched. He is in a white powdered wig and is wearing a black velvet coat with gold frogging on fronts and sleeves, scarlet waistcoat and breeches, white shirt and stock, white stockings and black shoes, a greyhound by his side. Distant skyline view on the left. Sheriff of Bristol in 1728 and Mayor of Bristol in 1742; feckless and extravagant, he died a bankrupt in France on 29 November 1761, unmarried.