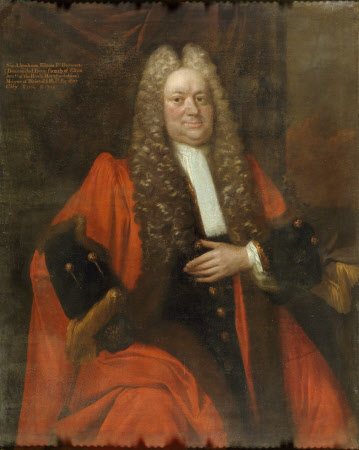 Oil painting on canvas, Sir Abraham Elton, 1st Bt (1654 - 1727) by Johan Van Diest (1695-1757), circa 1720. Lengthy inscription top left: ..... A portrait of Sir Abraham Elton as a stout elderly man, seated, three-quarter-length, turned slightly to the right, gazing at the spectator, his left arm resting on a cushioned table, his left hand on his chest and his gloved right fist on his right knee, in a long full-bottomed wig, and wearing scarlet mayoral robes and a long white stock. A large dark-red drape in the background bears the inscription. He was the second son of Isaac Elton and Elizabeth (?); married Mary Jefferies, daughter of Robert Jefferies As a wealthy Bristol merchant he bought Clevedon Court and land around Clevedon.

Killerton, The Acland Collection (accepted in lieu by HM Government and transferred to the National Trust in 1995)

Clevedon Court [The National Trust] revised 1972, 1974, 1977, 1979, p.26. "From the wall of the Great Hall, facing the gallery, Sir Abraham Elton I looks down with plump satisfaction in his scarlet robes as Mayor Bristol in a portrait by Johann van Diest, who specialised in local notabilities in Bristol and Bath."