The Visitation with Saint Paul and a Franciscan Martyr Saint 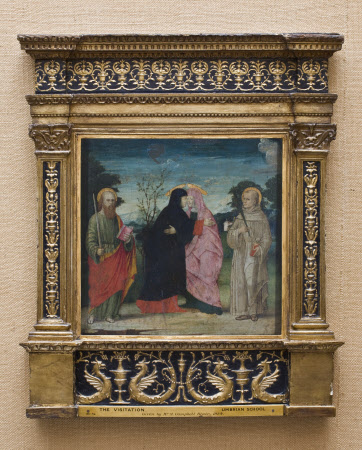 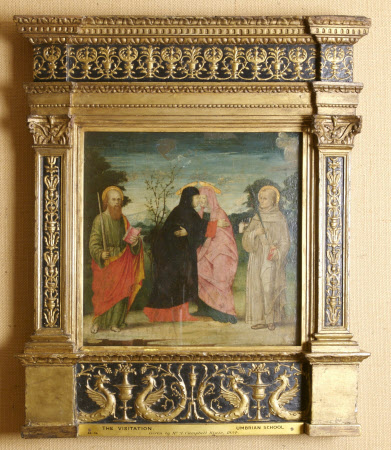 Oil and tempera on panel

The visit to Elizabeth by the Virgin Mary, soon after the angel has announced her conception, is told by Luke in the Bible’s New Testament. Mary is seen here in profile in what would have been a blue cloak but the brightness of the colour pigment has darkened with age. She is greeted by her older cousin, in pink, who is also pregnant by six months, with John the Baptist. Often the depiction of the scene includes Joseph and Zacharias, the ladies’ respective husbands, but, unusually, here, the figures are saints: Paul with his sword and Book of Epistles and an unidentified Franciscan martyr. All have circular haloes and those over Mary and Elizabeth are particularly artfully displayed, in perspective, into the landscape background. This is one of the first and earliest paintings to arrive at Montacute in 1948/9, having been presented by Alexander Campbell Blair (d. 1935) of Aberconwy House, Conwy.

Oil and tempera painting on panel, The Visitation with Saint Paul and a Franciscan Martyr Saint, Italian (Veronese) School, circa 1500. Four full-length figures, on the left Saint Paul, turned slightly to the right, wearing a green gown with red cloak lined with yellow, draped over his left shoulder, across his front and over his left arm, he holds a book in his left hand and a sword in his right hand he has a gold nimbus. Saint Elizabeth is turned to right and embraces the Virgin. She is wearing a black cloak [blue pigment oxidised] covering her head and revealing a pink gown beneath she also has a gold nimbus The Virgin is turned to the left, and embraces Saint Elizabeth. She is wearing a pink cloak which covers her head and reveals a blue gown beneath. Possibly Saint Francis of Assisi, is on the right and turned to the left. He wears a grey habit, holding ?; he also has a gold nimbus. The landscape is of a distant view of trees and mountains with blue sky and clouds. It is rather unusual to have the scene of the Visitation, when the Virgin Mary, newly pregnant with Christ, visited her cousin Elizabeth, six months pregnant with Saint John the Baptist, and uttered the Magnificant, shown between two saints.