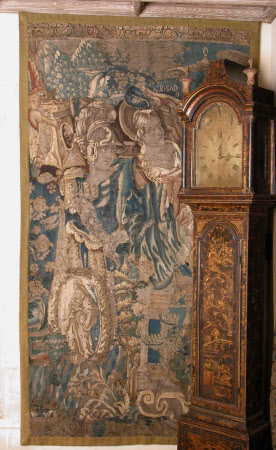 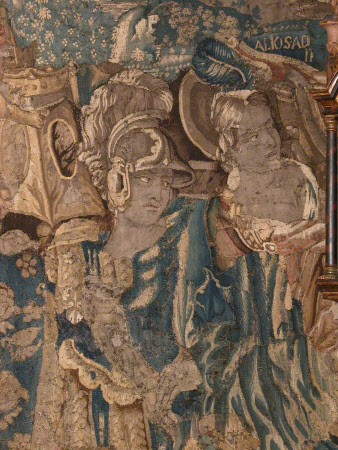 Composite tapestry, wool and silk, 5-9 warps per cm, European, c.1600-c.1920. A composite panel made from fragments of at least three separate tapestries stitched together. At the top are mountains and sky. In the centre are the heads and upper bodies of a man and woman, both looking to the right, the man wearing a plumed helmet and the woman a blue feather on her headdress. To the left of the heads a cherub holds a tripod, and to their right is part of an inscription reading ‘ALIOS AD / M I…’. At the far right are the front of a boat and part of a city on a blue background. In the lower half of the tapestry on the left is a large oval shield bearing an allegorical female figure, and on the right a collection of architectural elements interspersed with leaves. Along the top of the panel there is a narrow border with grotesque lions’ heads and fleurs-de-lys. A yellow wool repp galloon has been applied around all four edges.

This panel is in fact a patchwork of pieces from at least three different tapestries, pieced together to create a design with no overall logic. The focal point is a pair of heads, a man in a plumed helmet and a woman with a blue feather in her headdress, that appear in the upper centre. These heads have been cut from a late seventeenth-century Aubusson tapestry of the ‘Banquet thrown by Dido in honour of Aeneas’, part of a series of the ‘History of Dido and Aeneas’ whose design has been attributed to the Aubusson painter and tapestry designer Isaac Mouillon (De Reyniès and Laveissière, cat. no. 4.5, pp. 210-211). The man in the Packwood tapestry is Aeneas’s closest companion Achates, the woman is one of Dido’s attendants. The golden semicircle framing her head like a halo is a plate on a shelf behind her, part of a profusion of golden vessels in the original design which illustrate the richness and splendour of Dido’s palace. The blue feather which appears to be attached to hear headdress has actually been taken from the border of the same tapestry. Smaller patches from the tapestry appear throughout, most notably the shield at the lower left which bears an allegorical female figure. This is again part of the border of the original tapestry, a border design used not just for the History of Dido and Aeneas but for a number of other Aubusson tapestry sets of the late seventeenth century. The other pieces of tapestry which go to make up the tapestry have yet to be identified. The fragmentary lettering, reading ‘ALIOS AD …’ is presumably part of a border cartouche identifying a historical subject. The section along the top with a fleur-de-lys design is part of a tapestry border. This tapestry represents an extreme example of the kind of treatment that tapestries frequently underwent during the nineteenth and early twentieth centuries. Old tapestries that had become worn and threadbare through long use were no longer valued as works of art in their own right and were frequently cut up to fit into new spaces. Examples at Packwood include the tapestry cushion covers in the Entrance Hall and the Study, the tapestry table runner in the Entrance Hall, and the curtain pelmet in the Ireton bedroom. These would all once have formed part of larger tapestries, but have been recycled. The present tapestry represents an effort to maintain the function of a decorative wall covering by stitching together different fragments. More logical patching and mending can be observed on ‘Rebecca and Eliezer’ (557882) in the Long Gallery, where fairly large sections from different panels have been inserted, and incorporated into the design by overlaid couching to continue the main outlines. (Helen Wyld, 2009)